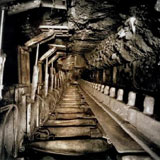 Let’s face it sludge fans, if these lot were from the States there’d be far more of a buzz about them. It just so happens that they’re from Rotherham, South Yorkshire, NOT New Orleans, Louisiana. And they’re much fuckin’ cooler for it. So say I. Ha.

Berserkowitz take the basic Eyehategod template, and there’s nowt wrong with that lad, and they recreate that classic bile sodden sound amongst the slag heaps, working men’s clubs and disused coal pits of their own broken territory, not the steaming swamps and chicken shacks of the Deep South.

This is a four track demo ep, recorded in January 2008, mixed in the spring and clocking in at a bruising twenty one minutes. The cover shows the hideous confines of a coal mine (what a brilliantly simple idea for a sludge band from Rotherham), and on the back the lads are posing in front of a big pile of slag. The South Yorkshire mining belt aptly lends itself to the aggression and pain of the rock hard sound that these four carbon monkeys whip up between ’em.

Title track ‘Gritfarm’ starts like any one of a dozen EHG numbers – a whine of rising feedback then guitar, bass and drums smack in like a rabbit punch from Roy Jones Jr. It’s pacey and attacking stuff, mildly ‘eccentric’ frontman Fletch’s dirty thick rasp indicating he may have prematurely succumbed to silicosis. The fat bloated bass lines of ‘Rob’ and the deft drumming skills of ‘Steve’ (no fuckin’ fancy names in Rotherham youth) intertwine remarkably well, creating a real solid foundation for Tom’s coiling guitar riffs.

Second track ‘Skulldust’ sounds rather more like Weedeater. Fletch in particular is doing a mighty fine line in ‘Dixie’ Dave Collins on this little belter. And it’s all cracking stuff, really enjoyable. Sometimes I don’t give a fat dog’s cock if stuff is derivative, in fact I like it all the more. EHG and Weedeater and the Melvins are THE SHIT, so why shouldn’t a bunch of young crater faced stoners emulate them? What else are they gonna do? Breaks up the boredom of signing on every fortnight. I should know.

Track three, the brilliantly titled ‘The Bruiser’ starts off with tasteful rim shots and snaking fuzz bass and then launches into a hot down tuned rock ‘n’ roll riff. Half way through they bring down the tempo and churn around for a bit. I’ve seen these young offenders live a few months back and they really can chuck some power out, very tight and very loud.

Last number, ‘Bow St. Bastard’, is no departure from the other tracks, all crusty sludge riffs and whiskey and weed damaged vocals. Yet again, I find it eminently listenable. Berserkowitz are the kind of band I wished I could have been in when I was twenty years old. Good honest sludge rock, nowt too special, no pretence, bloody good laugh, just get on the stage, get your fuckin’ t-shirt off and get your fuckin’ ink work on display to the one girl in the crowd of pot bellied shaven headed bearded men, kick out them jams, leave in a fury of feedback, then get bonged out afterwards, then puke up and then wake up in a van. Berserkowitz: ROCK ‘N’ COAL.