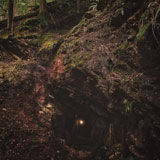 Canadian crust punk/hardcore bludgeoners Baptists are releasing their newest record, Bloodmines, on Southern Lord and it’s being produced by Kurt Ballou. I don’t really need to tell you what this sounds like do I? But I’m going to, because it’s my job, and not only that but this is one of hardcore’s rawest and most impressive records this year.

First track proper Wanting is a savage cocktail of galloping riffs and crashing breakdowns, swathed in howling feedback. It’s pretty nasty stuff, and is followed in a triple whammy by the equally vicious String Up and the razor-to-the-wrists assault of Closed Ports. It’s a three punch stunner, reminding me of Converge’s relentless No Heroes, if missing a bit of that band’s discordant howl. Vistas, however, is where the band start to get very interesting. They eschew the speed for a more measured, atonal noise rock approach, lengthening the tracks to cram in jarring riffs and see sawing melodies. You feel that you’ve just found Converge and Unsane’s illegitimate lovechild crawling down a back alley, looking for somewhere to rest.

Harm Induction brings back the high octane punk violence, flailing wildly amongst battering drums and throat shredding roars. There’s a raw emotion threading through all of the songs here. Baptists are not a band with a dimmer switch on the old fury and rage. Dissembler and particularly Festered capture these moments perfectly, the angst and passion oozes from each sharpened riff.

The title track brings more of that swaying, uneasy noise rock to the fore. Calling has a rumbling tribal beat underneath, with some cool riffs stretching over it. Final track For Profit is the only track over three minutes that retains that raging hardcore Molotov cocktail you’ve experienced in the shorter tracks, but in no way does it feel too long. The crushing closing minute will tear your mind apart.

What you have here is a bright light amongst the waves of Converge imitators that are suffocating hardcore punk at the moment. Baptists understand that Converge will never be topped as the BEST hardcore punk band out there, so instead they approach the challenge with a sideways step. Combining more menacing noise rock elements into their sound has paid off tremendously well, and in Bloodmines, they have a potent recipe for destruction. Twenty five minutes of this year’s more invigorating moments of music await you.