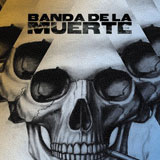 Argentina’s Banda De La Muerte are a testament to the strength of the growing and diverse metal scene in the South American continent, the same scene that boasts bands such as Los Natas [Argentina], Cultura Tres [Venezuela] and Avernal [Arg]. When I recently spoke to Cultura Tres front-man Alejandro Londono he spoke about the sense of camaraderie between this community of South American metal bands, bands who actively support and promote one another.

This network of like-minded musicians recently manifested a successful festival in Buenos Aires called South American Sludge, an event that brought these bands together and which helped to establish the scene as a credible and palpable entity. Banda De La Muerte are something of an anomaly, however, because they play Rock n’ Roll with a stoner twist .

Case in point is ferocious opening track “Dos Huesos” which comes across like a combination of Kyuss, Pantera and Queens of the Stone Age with the groove of the former two and the drive of the latter. It’s a great kick-start to this eight-track album and a real statement of intent from a band that may be new to many European listeners. Very soon into this quick-blast of an album it becomes apparent that while Banda De La Muerte are far from musical innovators, they’ve taken a desert scene framework and built a collection of interesting, arresting songs full of ideas, unexpected melodies and Latin flavour. “Cuando No Hay Mas Que Perder”, “De La Muerte” and “Esqueleto” all have plenty of Songs for the Deaf-era QOTSA pomp and velocity about them, which can only be a good thing, but there are also plenty of little surprises along the way.

It’s not fair to say that all of the songs on the album are desert grooves either; “Madera Sagrada” is an unadulterated hardcore punk song, thrashing along in less that one and a half minutes, kicking your teeth-in in the process. Likewise, “Los Ojos Del Diablo” starts off like Kyuss but half way through the song takes an unexpected turn, sounding like early Korn with John Otto behind the kit. In a good way, surprisingly. Many of the songs on the album would be best described as stoner-punk as they have too much passion and intensity to be straight-up stoner tunes and too much groove to be conventional punk songs. Final track “A Traves De La Sangre” is a slow-burner, a kind of ballad but packed with riffs.

Where the album might divide opinions is in the vocal delivery of singer Xon. His singing style veers between a power-rock holler and a Lemmy-style growl and some of the vocal melodies may seem a bit too familiar and middle of the road for some listeners. I must admit that at first I didn’t think much of the vocals either way, but eventually the melodies won me over and I actually found myself enjoying the unabashed retro quality of Xon’s voice. Listen to the first few songs and, just like your first taste of marmite, you’ll soon find out whether you love it or hate it.

It took a few listens for this album to click – perhaps it was the language barrier but more likely it was the subtleties in the songs that only revealed themselves after the third or fourth play. The vocal melodies that at first seemed shamelessly retro and cheesy actually became ingrained in my head, riffs slowly fell into place in my mind and lead guitar parts buried in the mix sprung forth to add a new dimension to the songs. This isn’t an album that’s going to blow your mind but it’s a solid stoner rock album that will serve you well on car journeys, whether down long, straight roads through the Palm Desert or up the M5 on a wet Tuesday morning. The quality of the performances, the crisp production and the accessible feel of the album make this a fantastic introduction to those of you wishing to dip your toes into the South American Sludge scene. But as we’ve already established, this ain’t South American Sludge, this is South American Rock n’ Roll.