It can be quite fascinating to chart an artist’s long-term musical evolution and I have had the privilege of observing industrial doom/drone powerhouse Author & Punisher over an extended period of time. From the humble laptop and guitar beginnings of The Painted Army and War Cry, through the cold, alien sounds of Doppler from 2010s Drone Machines, the woozy dubstep of Ursus Americana’s Terrorbird to the expansive Women & Children and the savage brutality of Melk En Honig, Tristan Shone’s Author & Punisher has been a journey of perpetual motion.

However, there is a moment on 2019s Beastlands, his Relapse Records debut, where on The Speaker Has Been Systematically Blown, Author & Punisher seemingly transcended his own mission to create an otherworldly, dystopian soundtrack and simply moved into the realms of the sublime. This year’s follow-up, the much-anticipated Krüller, was touted as a ’melody laden album’. On many levels, this is an accurate description but also falls far short of delving into the complexity of the work captured on this ninth release under the A&P banner. Mainly because it fails to mention that this album is undeniably the most spectacular milestone yet.

Much is made of the narrative connectivity in an album that elevates it far beyond a mere collection of songs. In the past, the thematic and stylistic choices for each unique presentation has held together the music, whether it was written as a song or as a movement that can inspire or shape feelings, with Krüller Shone delivers a masterclass in atmospherics.

Much can be talked about what instruments do; the frantic picking of a black metal riff or the thundering of blast beats on a death metal album, here Author & Punisher, with its unconventional sound creation tools, prove that music is as much about structure and the use of the space between that can elevate a simple refrain into something stirring and heart wrenching. Sometimes the power of music lies in letting the moment breathe as it batters the listener over the head with skills or hooks.

Quite often in my reviews, I work through individual tracks highlighting stylistically what is going on at any given time, on Krüller it somehow feels like I’m doing a disservice to the entirety of the album to simply break it down into bitesize shuffle era components. On this album for example, the second the majestic sci-fi opera like Maiden Star with mechanised clanks acting as a heartbeat for the moments of sweeping beauty, and the despair that’s been applied to the cover of Portishead’s Glory Box are just high-water points in a tsunami.

It’s almost strange listening to this album ten years on from watching a video of Tristan creating his own instruments, reviewing Drone Machines, then meeting the man in Bristol to conduct an interview, to now see where his vision has taken him. In some ways, whilst a huge gulf separates that from this new album, the mind that has pieced together and sequenced those releases, has been as intricate in attention to detail as the one required to design each robotic element in order to string the sounds coherently together.

There was a time, if you were being disingenuous, it could be argued Author & Punisher were a novelty act, part arthouse performance with the hand-crafted sound manipulation device through which he has wrought this mechanised cathartic extension of himself. However, time has proven that Shone is not only ambitious, he’s also extremely good at writing as there are bands who skillfully use conventional instruments, but lack that ability to channel the emotional depth that is on display here.

Armed with upgraded and new machinery and sporting a cast of collaborative musicians that include his wife Marilia (backing vocals on the beautiful Maiden Star), manager and As I Lay Dying guitarist Phil Sgrosso, who wrote all the guitar parts that swell the sound on the album, as well as Danny Carey and Justin Chancellor, former tour mates and legendary Tool members, who helped create the moody and hard-edged Misery and dark dub laced Centurion.

Krüller is an album that feels like it could almost live and breathe, which is a revelation given the almost stark, howling rattle and hum that catapulted him to the fore; on the title track, Shone’s voice has grown in stature to something almost unrecognisable that drips with feeling and melody in an almost The Cure like passion. Along with the absolute banger that is Incinerator and the jittering IDM influenced Blacksmith, this is an album that retains the core sound of his original concept but has a real feel and passion in the lyrics managing to feel distant and isolated, yet passionate, like a trapped, pleading voice from the void beyond.

In some ways, the recently concluded TV series The Expanse feels like a metaphor for Author & Punisher. From its humble gumshoe detective roots, the show evolved into a commanding sci-fi epic, likewise the noises generated from the machines now sweep the listener skyward like the spinner’s from Ridley Scott’s Blade Runner.

Krüller definitely does not hit as consistently hard sonically as on previous releases, nor does it echo the cold dread of some of his earlier work, however, the ghost in the drone machine which has seeped into his work over the last decade has manifested itself on this eerily soulful and ultimately beautiful record, proving there truly are no limits where this very unique artist can go. 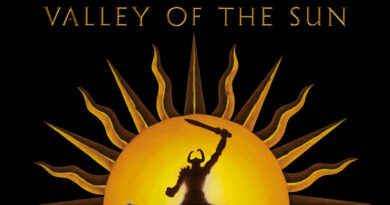 Review: Valley Of The Sun ‘The Chariot’