Steve Von Till has been busy with his solo albums, and I’ve been soaking in everything he has released. Scott Kelly had been quiet for a little while and Neurosis seems to be on hold for now while Steve tours to support his solo albums. But then, seemingly out of nowhere, the newly formed supergroup Absent In Body announces a debut album featuring Scott Kelly of Neurosis, Colin H. Van Eeckhout and Mathieu Vandekerckhove from Amenra, and Iggor Cavalera who’s probably most well-known for his time in Sepultura and more recently Petbrick.

To me, that is the true definition of a supergroup. I didn’t even hear a note and knew I was going to be blown away by the music. Neurosis and Amenra are two of my favorite bands and although I never got into Sepultura, I have been known to play Roots Bloody Roots so adding Iggor’s powerful drums to the mix was intriguing.

Rise From Ruins starts off the Plague God with dark sounds, clanking chains, dripping water and distant growls. The pulsing thundering drums of Cavalera give life to the dark scene set. Heavily distorted guitars and vocals come crashing in and leave as quickly as they arrive. Eeckhout’s vocals are screamed over a quieter lead. The drums join back in building up quick tension as the grand closing portion chimes in. The deep guttural vocals contrast perfectly with the higher screams, signature to Amenra’s sound.

In Spirit In Spite immediately gives me a Neurosis vibe. The doom-esque vocals are mind blowing. It has a harsh sound but seems blended with a haunting reverb as if in an abandoned tunnel. I particularly love the intense beginning with the slow five min reverse crescendo, reminding me of Tungsint’s Kepler-62F. I absolutely love the clean tone at the end.

Slowly increased ambient sound explodes with industrial style drums, a wall of sound distortion, and those haunting low growling vocals. Sarin is an intense song, it fits perfectly after the serene ending of In Spirit In Spite and one of the many reasons post-metal is one of my favorite genres.

Cavalera again shines on The Acres, The Ache. The swarming sounds increase in volume as if the bees are getting closer while Cavalera pounds out a masterful heavy drumbeat. The vocals join in, this time meshing both high and low spectrums of the screams and it is flawless. The music quickly fades leaving goosebumps behind and the soothing lead fills the air. I absolutely love what these four guys have done and hope this isn’t a one-off. Combining the musical geniuses of Kelly, Eeckhout, Vandekerckhove, and Cavalera is better than I had expected and everything so far has led to a closer to remember.

The Half Man Rising is the final song on the album and is just over eight minutes of pure crescendo. Wavering ambient sounds creating texture start the song. The clean yet heavy guitars are chilling that become more distorted as the song kicks it up a notch and the powerful bass drum send ripples throughout your body. The excitement is building from within. Static sounds begin to take over creating an eerie and uncomfortable tension that is released with a sonic boom of drums. The wall of sound is accompanied by harsh deep growls makes this bigger than life. The song abruptly ends as if a car comes crashing to a halt and the emotions catch up shortly after, much like the content in the back of the vehicle ends up in the front seat after a split-second delay.

I didn’t have to listen to this album to know I was going to love it. The musicians involved are some of my all-time favorites and inspirations, so I immediately knew this would be something special. In the back of my mind, however, I did have 1% doubt. Just because my favorite musicians get together doesn’t mean a guarantee as I’ve been let down by ‘supergroups’ in the past. Absent In Body however did not let me down. It’s post-metal in its finest form and I only hope it’s not a one off and we can get more sooner than later. 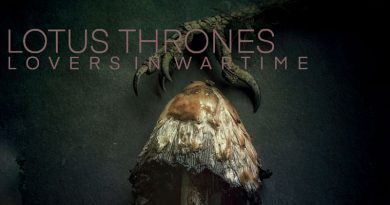