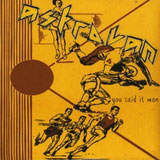 For a start Astrovan have a big beardy tattooed singer called Deezer and a guitarist called Big Zeke. That alone makes them extremely cool!!! Unfortunately their bio does make a point to mention that they opened for Nickelback and Papa Roach in their hometown of Seattle in the summer of 2009…that isn’t so cool. If you stand shoulder to shoulder with shit some of it will stain you. This little faux pas aside a few listens to this 6 track EP will show that there is much here to recommend Astrovan that means that, hopefully, they’ll be able to transcend having to support pointless fake rock to get a crowd.

It’s not immediately apparent how to categorise the band. They’re not stoner but occasionally there is the odd twist that hints in that direction, they’re not grunge but their Seattle heritage does occasionally shine through in a kind of Alice In Chains vibe. They’re metal but in a more polished, 70’s embracing way that’s built on big riffs, big vocals and big choruses. Astrovan are a kind of identikit American rock band… “Every Change” is a ballad hints at both Lynyrd Skynyrd and the aforementioned Alice In Chains with Mike Patton on vocals whereas opener “Too Proud” is a balls out riff fest that guns the gas and goes for broke. “Hollywood Shuffle” boogies along nicely and “Uptight” rolls on a pleasant groove. Vocalist Deezer has a fine way with a melody and a strong set of lungs but I can’t help wishing for a little more grit and character. The guy could sing the phone book and it would sound good but there’s not a huge amount here that sets his voice apart from so many other people. Similarly, with the music, these guys have their chops off to a tee; the riffs are strong, the drumming has an easy swing and groove and there are some very tasty guitar solos to keep the 6 string fetishists drooling. Yet despite this there is something quite safe about Astrovan. Nothing here stands out as being on a level that would make them noticeable in an id parade of bands. This is very high quality, well produced, well written Middle American heavy rock that is lacking in a little dirt, danger and rock and roll spirit but is big on quality, professionalism and class.

Ultimately this is a decent collection of songs and if you want something to rock half an hour of your time and get your head nodding then this is the stuff. If you want something with a little more body and personality I suggest you look elsewhere and leave this to the middle class frustrated rock chicks. Whatever else they may be though, Astrovan are still a damn sight better than Papa Roach or Nickelback!!!