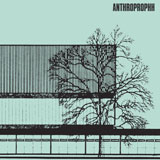 The 2012 debut from Paul Allen’s Anthroprophh was, by all possible standards, a prime example of 21st century krautrock done right but since then there have been a few changes, the most notable of which is the promotion of the Big Naturals-derived touring band of Gareth Turner and Jesse Webb to full-time collaborators. ‘Precession’ is the result of this new partnership, 12” of sonic adoration and ceremonial beats that retain the debut LP’s mesmeric presence but adds some serious fire into the mix, even if it’s not always blazing on the surface.

Side A is occupied by the droning luminescence of ‘Precession’ (Retrograde), a temple of buzzing synth and percussive ritualism. At first, it could be taken as some kind of Akira surrogate soundtrack, a jam-session blend of retro-futurism and the spirit of a far-Eastern doomsday cult, though as it progresses in rhythmic undulations and squalls of synth the intensity slowly builds into something electric, a screeching, clawing solo from Paul Allen is the perfect preface to its final incantations. With an upsurge in intensity, both in the ever-hastening drums and ecstatic, wildly bucking synth, it grows to epic dimensions before collapsing in on itself.

On the flip-side, ‘Ebbe’ is decidedly more unsettling, the synths more suited to horror-movie tension and the drums coming in sparse, faint waves, testing the water and waiting to emerge. When the first real melodies of this EP sneak in, they’re strange and smell like delirium, an off-kilter counterweight to the hulking chunks of bass being thrown into the mix. Along with the thunderous drums, sharp and violently applied, it feels more like an actual song than the meditative composition that prefaced it. It’s a huge, sprawling and fluid song, rising and falling with each crackling burst of guitar and billowing undercurrent, but it’s nonetheless more of a structured counterpart, the body to Precession’s soul.

While both tracks here are working with the same ingredients, they present two approaches to Anthroprophh’s sound, as well as to composition itself. The Terry Riley-esque title track uses the components in tandem, giving it a liquid sense of order and flow, while ‘Ebbe’ is combative in nature, each element fighting for supremacy and engaging in abrupt sneak attacks. One is calm, the other turbulent, but both are perfect for anyone with a love of high-calibre synth reverence and half an hour to spare.