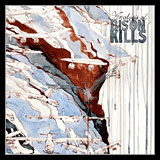 Analysis Of Bison Kills formed in 2001 and have released two demos plus this new four track ep/mini-album, which clocks in at about thirty minutes. It features brothers Nathan Dicks on throat shredding vocals and Matthew Dicks on guitar, synths and ‘clean vocals’, plus new, robotic rhythm section Scott Tyrell on bass and Dutch drummer Andries van der Boom (real name? I hope so). Exactly how many bison are killed nowadays, and for what purpose? The band’s name certainly got me thinking about the geo-politics of North American big game hunting and the link to interpreting related facts through various statistical packages.

Let’s get something straight before I start whining, AOBK have a powerful and bludgeoning sound and played loud they really can kick out some cerebral yet testosterone fuelled dynamics. All the band members are accomplished musicians, particularly guitarist Matthew, who is a fluid and intricate note master of quite some ability.

First track ‘Honest Broker’ kicks off with a crunchy repetitive riff and builds upon it, bass and drums weaving onwards and upwards with a certain mathematical precision, bringing in the grating sub-black metal vocal style of Nathan Dicks. At points the riff drops out allowing space for the rhythm section to almost gently undulate and rise, ushering in some tasteful and melodic guitar work. The whole song clocks in at just over nine minutes.

Second track, ‘When Small Men Do Great Things’ (I like the title, makes me think of Napoleon) starts in a far more post-rock vein and could easily be Isis or Red Sparrowes in that it bounces along in mathematical fashion for six and a half minutes, bass and guitar playing the same notes, alternating between the thud of the bass guitar/kick drum and the smack of the snare, occasionally rising to a fury of overdriven guitar and earth shattering yell. Effective, but…have we not heard this before my tattooed and slightly rancid friends??

Track three, ‘For Whom It Serves’, kicks off again with a very technically precise, cold, angular riff and again builds along in a linear fashion for six minutes (I am increasingly preoccupied by timings). Nathan is beginning to sound more and more like Quorthon (RIP) from Bathory, which is certainly no bad thing.

Last track, ‘Depth Is Earned’ is another post-rocker with both quiet noodly bits and angry loud bits and bubbles on for nine minutes and twenty five seconds (help me). It is very well executed, like the rest of the album, and the actual musicianship is faultless (the drumming is particularly tasty). But I feel the ‘creative soul’ of the band is not present – this is audio photocopy. As a reviewer, like some latter day sonic Percival looking for the Holy Grail, I ultimately seek some originality.

To be truthful, if you own anything by Isis or late-period Godflesh, this is not going to grab you by the bollocks (or outer labia). To summarise, AOBK take a firm post-rock template and add a little industrial and a pinch of black metal in order to produce an ep that is technically very accomplished yet nothing particularly new for the listener. The production is very clear, although a little quiet.

Objective adjective time: listenable, very well executed, polished, generic. There are one hundred post-rock bands out there who all sound the fucking same, therefore one sticks to the originals like Pelican etc. because they still do it better than any imitator. Live, AOBK may be quite some experience, but going on this album alone, I find a listenable, competent, yet rather unoriginal band that need to develop their own identity in a genre chock full of imitators. If I came to AOBK fresh without ever hearing certain bands, then this would fucking kick arse…trouble is, all I hear are other certain bands. Then again, I enjoyed listening to this, and with repeated plays it gets more rewarding. Verdict (read aloud in dalek voice and repeated until hoarse): eminently enjoyable but nowt new.