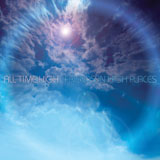 So, with a name like All Time High and coming from the Small Stone stable I was expecting a bunch of pot-bellied, heavily bearded backwoods throwbacks raping the shit out of a bunch of Big Muff pedals and extolling the virtues of pretty much any form of intoxication…whether that be a bong full of Mary Jane, a barrel load of fermented hops, auto erotic asphyxiation or burnt pigeon shit smoked off a shoe polish tin lid. This sounded like a band with an eye on a party and a whole lot of noise. It seems my expectations have, once again been confounded by those pesky Small Stoners. There are two things that you notice immediately; one, they’re from Seattle and two; the album cover resembles some sort of chill out style trance compilation. Holy Shit Toto, I’ve a feeling we’re not in Fuzzville anymore!!!!

The Seattle thing is easily the most significant thing about All Time High. The various members have all served their time in various bands around the rainy city in their past and are acutely aware of the musical heritage of the region…I think we all know that I’m referring to the grunge boom of the late 80’s/early 90’s. That’s not to say these guys are a bunch of dour, plaid clad downbeats recycling Sabbath riffs. You won’t hear a trace of Soundgarden or Alice in Chains style frowny metal here or even Mudhoney’s lysergic garage fuzz. Nor will you hear The Melvin’s elephantine crawl. The ghost of Mr Cobain does loom large over much of the proceedings here, however, particularly in the vocal stylings of Adrian Makins whose raspy grasp of melody betrays a keen slacker sense of what makes a great pop song. All Time High, however, don’t plummet the depths of noisy, double barrel sucking angst that Nirvana seemed to wallow in, rather they have taken the keen pop suss of that band and thrown it in with a whole load of other influences to create a fantastic soundtrack to a lazy summer. It may not be stoner rock in the accepted sense but it sure as hell is stoner rock as West Coast psychedelia rubs shoulders with fuzzy 70’s rock riffs and tips it’s hat to punked up Soul Asylum style Americana.. All Time High may be respectful of their North Western heritage but they’re certainly not chained to it.

All Time high are able to switch from strident rock as on opener “Rule of Thirds” to the more indie Nirvana meets Pixies meets REM jangle and roll of “Pollyanna” (Kurt would have killed himself to come up with that chorus!!!). At the other end of the scale “Tight Rope” mixes a phased stoner riff with a loose blues progression that could have come staggering in from the mid 70’s in a haze of weed and whiskey. The whole album is the musical equivalent of a carb free diet…no bloating and heightened levels of energy. No riff or melody here is surplus to requirements and each song an exercise in economics. Even when the band throw a curve ball as in “Twistin’ The Knife” which side steps effortlessly from a brooding off beat verse to a summery punky chorus it all flows like tequila at a beach party.

To further their grunge credentials the band have drafted in veteran grunge producer Jack Endino to give the songs a lean and mean, perfectly balanced lovely dry sound that gives the guitars of Makins and Sam Williams enough punch, edge and clarity to really cut through yet enough fuzz to give a nice breadth of sound. As with the songs the production is also stripped down and live giving the impression that in the studio, in a club or in the rehearsal room you’ll get the same sound every time…and that’s what you want from a rock and roll band…the truth!!!

It is hard to dodge the Nirvana comparisons here, “New Urge” would have sat very happily on “Nevermind” and “No Mind” would have been a real highlight had it appeared on “Bleach”, but the fact remains that Nirvana spearheaded a change in music nearly 20 years ago and in terms of sheer quality pop song writing were largely flawless so such comparisons should in no way be taken as derogatory. To create a 12 song album of such class and compositional skill where each song stands up as a perfect nugget of high energy rock and roll gold is an impressive feat regardless of genre or influence.

So kick off your shoes, lay back on your bed with a big fat doobie and let this album slowly seep into your conscience as you step into slacker heaven…and take my advice, let it spin a few times to really let it open its arms and pull you in as it may not be an immediate fix for some of you, but once it’s in there it’ll have it’s feet under your table and its toothbrush by you sink for good.