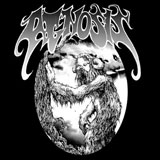 Agnosis were a fiercely renowned sludge, doom band from upstate New York, formed in 2002 by Austin Lunn, Andrew Jude and Robin Koytcheff. The band released three EPs and one LP before going on hiatus in the beginning of 2007.

Now they have come crawling back from out of the shadows and are ready to spew venom with the best of them and prove to the likes of Eyehategod et al that the south doesn’t have the monopoly on the strangled swamp sounds.

Having lost Robin Koytcheff, the drum stools is currently being filled by A Lundr (of Panopticon fame) and have a full length album ‘A Painful Pattern’ slated for an October release. In celebration of this the band have made their critically acclaimed 2005 ‘Hecate EP’ available for digital download for the first time in a wise move to celebrate their return and peak people’s interest in the new album.

Having missed them first time out I was pleasantly surprised to hear how the music hasn’t dated in their time away; ‘Unholy Lord’ comes scraping and crawling from the bowls of whatever basement it has been lurking in for the last six years and all medieval on your ass with its huge riffs, pounding rhythm section and throat scrapping growled vocals.

Much like Crowbar and EHG Agnosis wear their influences on their sleeves and this is a musical tour de force that is centred around crushingly heavy walls of doom and slow dirges but still retain the melodic sensibilities of Trouble and Black Sabbath as the not one, but two winding guitar solos that run through the opening track prove.

Next up ‘Fight To Win’ is a great peace of song writing that kicks off with a sublime Stoner/Sabbath riff that has you rocking out before the slow verses suck you in and the heads down, driving rock out passage at the end leaves a great big smile on your face.

Closing off the EP ‘The End Times’ is exactly that – a soundtrack for Armageddon. It starts off fast and manic, screaming and clawing for your attention with a bug eyed crustcore that recalls Napalm Death brutality, before it grinds down into some seriously murky sludge.

Make no mistake this is a DIY release that is so filthy and remorseless you need to take a shower after hearing it. Agnosis marry the lyrics and politics of urban decay and confrontation with the sounds of a society running into the gutter and ‘Hecate’ sounds fantastic for it.

Obviously as a teaser for the new album it re-affirms what the band is about and is a timely reminder of their manifesto. Hopefully instilled with the enthusiasm of fresh blood in the ranks ‘A Painful Pattern’ will see them battering mosh pits all over.