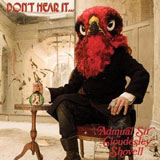 Some bands are definitely influenced by the old guard of bands whereas other bands actually seem to inhabit some bygone era and recreate the styles and sounds with unnerving accuracy. The good chaps in Admiral Sir Cloudesley Shovell seem blissfully unaware of anything that has happened in popular music for approximately 40 years, their proto metal sounds drinking directly from the source of all music we love and adore.

Opening with some spacey psychedelic refrains on “Mark Of The Beast” the good Admiral quickly lays bare its soul with some full throttle, fuzzed up, driving rock and roll that is heavily influenced by the first wave of post Sabbath bands to emerge…bands such as Sir Lord Baltimore, Incredible Hog, Iron Claw, Jerusalem, Captain Beyond and Budgie but mixing it up with a punkish energy that brings to mind MC5 and the Pink Fairies. This is equal parts a rock and roll arse kicking of the highest order and an exercise in the darker strains of post Sabbathian early metal. One listen to “Devil’s Island” sees the band pulling both strains of their sound under one roof as the doom laden verses give way to a righteous rock freak out at the midway point that doesn’t let up until the song’s conclusion.

“iDeath”, despite its modern iPod bating title kicks off in high octane style with a tight, lock step bruising beat before dropping into a maelstrom of noise over which guitarist/vocalist Johnny Gorilla mangles his throat. ASCS (I can’t be arsed to write the name out in full every time), rarely sit on an idea for any longer than it needs to so this and every song on the album hurtle headlong through multiple passages that twist and turn rhythmically and stylistically but remaining true to the spirit of the age. “Red Admiral, Black Sunrise” is a brooding, slow burn groover that has a funky undertow but, as with all other tracks here it isn’t long before the Admiral guys shift gear and get their boogie on.

“Scratchin’and Sniffin’” carries on where the previous tracks left  off but throw some Hammond in the mix and allow Johnny free reign to wail on his axe to his heart’s content over bassist Louis Comfort-Wiggett and drummer Bill Darlington’s snaking grooves. By contrast “The Last Run” blasts along on an aggressive pummelling rhythm that sets controls for the heart of the stun and holds you against the wall with a flick-knife at your throat.

The Admiral boys show they are able to throw in some good old fashioned weirdness on “Killer Kane” which sits on an uneasy, off kilter riff but isn’t shy of bringing the rock when it needs to…and even throws in a riff that isn’t a million miles from Iron Maiden’s “Two Minutes To Midnight”!!! Finally, if you sit tight for 7 minutes…maybe roll yourself a joint and grab a cup of tea…you get to the “hidden” track, “Beanstew” which sees Johnny practicing his best John Garner from Sir Lord Baltimore impression on the vocals but also isn’t afraid to chuck in some tasty harmonies out of the blue.

The ASCS sound is raw and hectic…as if the band were handed £300, pointed towards some flea pit studio and told not to come out until they had recorded an album. The overall vibe is that of a band standing toe-to-toe in the studio with amps cranked to the max and playing live in each others faces. By amps I don’t mean modern all singing, all dancing shred machines; I mean real old school valve amps that only start to sing when they’re making blood drip from your ears. Johnny Gorilla has absolutely nailed those vintage fuzz tones and they’ve been placed front and centre and sharp enough to trim your overgrown sideburns. Reflecting the sound, the emphasis here isn’t on pristine performances but on nailing the attitude and jizzing great wads of it right in your face. All the musicians lock together almost telepathically but given the live sounding nature of the performance if Johnny fluffs the odd the note it’s not because he can’t rock out with the best of them, it’s because he’s lost in the moment and one odd note is immediately followed by a dozen killers…and that my friends is exactly what rock and roll should be about. Imagine if Keith Richards played everything as flawlessly, not to mention as soullessly as Yngwie Malmsteen, the Rolling Stones would have sucked.

Rise Above Records have, alongside their love of doom, always championed bands that hark back to the good old days when metal was fresh and new and in Gentlemans Pistols it seemed they had the style nailed…until they found Admiral Sir Cloudesley Shovell who have not so much taken the crown as ripped it from their heads with bits of hair and skin still attached. Buy this album, preferably on vinyl…it will be money and an hour of your life very well spent.