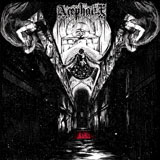 Hailing from San Francisco, Acephalix deliver their sophomore album for the ever prolific Southern Lord Records. Touting crust ridden, brutal death metal with a raw, old school production lends them a sound that sits somewhere between the aesthetics of classic Swedish death metal such as Entombed or Grave and a more driving, d-beat approach, similar to label mates Black Breath and Dead in the Dirt…a heavy concoction to say the least and something that Southern Lord have been heavily touting as of late, old school roots with nu school venom. However the band are not exactly newcomers to the scene, a little digging reveals that their previous releases, outside of any self-funded efforts, have mainly appeared on the infamous Hardcore Punk label Prank, alongside artists such as Slang and Iron Lung, so the crust punk history is there and present, just with ‘Deathless Master’, Death metal is the order of the day.

Don’t expect anything completely mind-blowing or original here, just good old fashioned, almost formulaic, Death Metal from the Swedish school of thought. The thing that hits you square in the face and sets the band apart is the unbridled energy these guys put across. Opener ‘Bastard Self’ lays down the gauntlet from the off, buzzsaw guitars break into an onslaught of heavy riffage and d-beat drum blasts, pummeling you into gleeful submission whilst layers of grim intention pervade the entire track. Savagery is here by the bucket load, title track ‘Deathless Master’ nails the Swedish vibe entirely, think ‘Left Hand Path’ for a new generation, this is not metal by numbers by any means though, they are not simply ripping off the old masters, but paying homage.

‘Tomb of our Fathers’ is probably my favourite track on the album, recalling a dark grimness encapsulated by the likes of Autopsy and resurfacing amongst new school bands such as Cruciamentum and Impetuous Ritual, a heavy opening riff gets you grimacing in no time, devil horns are flashed and you are away. A bit more of their punk roots shows through on ‘Raw Life’ feeling a little more Discharge influenced at points especially the chorus, this does not detract from the dark atmospheres already laid down however, but just adds that little bit of extra bite.

Things get a little tired after this though, the last three tracks kind of meld into each other, offering nothing new from the previous offerings and leaving little impact, this is not to say they are terrible, but certainly the ‘meat and potatoes’ of the album, keeping things merrily chugging along. I can’t help but get the feeling this should have been left as an E.P and not a full length LP, just for more impact and longevity, I found myself reaching for the stop button on more than one occasion after the halfway mark.

Hats off to Southern Lord though, just when you think you have heard pretty much every decent crust/metal crossover worthy of their salt, another little gem is unearthed to feast our adolescent souls upon. Not the best release they have thrown our way, but certainly not the worst, especially recommended if a fan of both Black Breath and Entombed, this will leave you feeling mightily satisfied.