The band -(16)- are a four piece from Los Angeles and consist of Bobby Ferry (Vocals), Alex Shuster (Guitar), Barney Firks (Bass) and Dion Thurman (Drums). As someone who doesn’t tend to gravitate towards the sludge wing of the doom/stoner tree I was aware of -(16)-’s presence but had never investigated their work. They’ve been in existence since 1992 and are considered influential within the genre alongside the likes of Crowbar and EyeHateGod.

Dream Squasher is the band’s eighth album and the follow-up to 2016’s Lifespan Of A Moth. The first thing I noticed was the beautiful and surreal nature of the Dali-esque artwork so I was already intrigued as to how the music would turn out. As you’d expect from a sludge band the album opened with a squeal of feedback with the track Candy In Spanish. There sure were some meaty riffs here, kind of like early Black Cobra, Bestial era.

According to the album’s promo notes this time round some effort was made trying to inject some positivity into the lyrical themes. However according to vocalist Ferry ‘The best we could come up with is loving your dog so much, you’d end up killing yourself if the dog dies’, leading me to the track Me And The Dog Die Together which, at the very least, is quite a touching sentiment. The tune itself was, dare I say, ‘happier sounding’ with quite an anthemic chorus. The grimly named Sadlands had an epic Candlemass style tone to it, with Ferry sounding like a mixture of Messiah Marcolin and Ozzy. It’s a track that may take the bands core fan base by surprise, but in a pleasant way.

Harvester Of Fabrication went in a Crowbar direction (the song title even reminds me of that band) with Kirk Weinstein’s familiar lumbering riffs, this then led onto Acid Tongue, the longest track on the album at over six minutes and with more of a gothic Paradise Lost/Type O Negative depressive feel. I enjoyed the track but felt it could have done with maybe losing a minute or so.

Agora (Killed By A Mountain Lion) started off with a pleasant, almost jazzy, intro that reminded me one of the opening tracks off John Carpenter’s They Live, before some crushingly heavy riffing kicked in. Ride The Waves started with some thunderous hardcore punk and some simply awesome black metal style drumming from Thurman. A brilliant and much needed change in tempo. Summer of 96 curiously had an early Machine Head feel with some amazing groove metal riffs which afforded those of my generation who grew up in the 90s, the chance to get a bit momentarily misty eyed.

Screw Unto Others had Ferry growling ‘Bury Your Head in the Saaaand’, suggesting that someone may have royally pissed him off, it’s thematically the sludge metal equivalent to Queen’s Death On Two Legs where Freddie Mercury lambasted the band’s former manager. Kissing The Choir Boy concluded the album in standard sludge metal fashion, a decent track, but one that passed me by leaving little Impact.

Having not heard –(16)-’s previous albums I was uncertain as to how Dream Squasher compared, however I would say that for the largest extent I rather enjoyed it, perhaps more than expected. As someone who has never fully taken to their contemporaries in the scene, I was uncertain as to what to expect. The conclusion I drew was that there was enough variety to keep me interested and to warrant investigating the rest of their catalogue, which in my experience can only be a good thing. 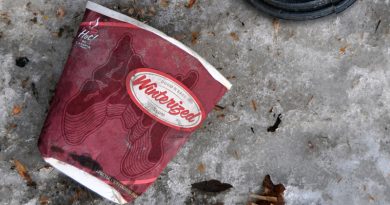