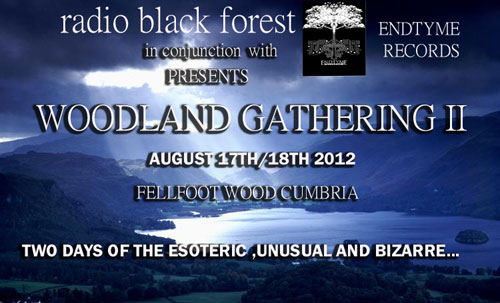 Radio Black Forest and Endtyme Records present the much anticipated second instalment of the WOODLAND GATHERING.  Building upon the success of the last event in July 2011, this year’s line-up will go one step further in providing a true celebration of the esoteric, bizarre and experimental. Expect record stalls, films, talks, DJ’s and of course, live music all set against the stunning back drop of the Lake District and the unique atmosphere of Fell Foot Woods.

There will be lots more announcements coming soon, but in the meantime, this is what we have in store for you so far…

FAUST (tbc)
A band that needs no introduction… Inventors of ‘Kraut Rock’, iconoclasts extraordinaire, Faust are key figures in 20th Century music. In the early 70’s, along with Can and Kraftwerk, they re-invented pop music as a specifically European art-form. Virtually imprisoned by Polydor in their own studio for two years, they were able to revolutionize the whole process of musical production; they improvised with Industrial noise, generated bizarre hypnotic grooves, indulged in shockingly wilful studio-based collages, and dabbled with every conceivable musical genre, sometimes simultaneously! Every now and then they found time for a burst of satirical pop, or occasional waves of delicate ambience. Amongst those Faust have strongly influenced we must count Brian Eno, Joy Division, Cabaret Voltaire and a whole host of industrial and techno bands.

Hard to categorize, they work within a fluid experimental framework and have, since their beginnings, incorporated sampling, musique concrete and electronics as mainstays alongside their more orthodox disintegrating rock structures. Gordon Sharp is the only consistent member of an ever-shifting line-up that still plays live and releases regularly.