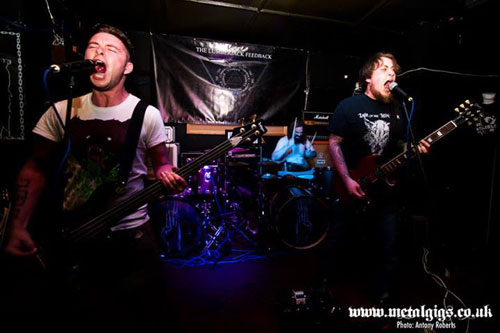 So, who’s mightier: Gandalf or Merlin? There’s only one way to find out… Wizard Fight!!

Kicked off in 2012 by drummer Dan Large (ex-Steak) and guitarist/vocalist Luke Bolton (also of ROTS) as an excuse to knock out some tar-thick sludgy jams down in their quaint confines of sunny Hastings, Wizard Fight quickly recruited bassist Dave Sage and began to blitz a dirt track of blackened, groovy madness. With just a demo – entitled ‘The Beast Lives’ – to their names thus far, it’s still early days for these noble beard-cultivators and riff-mongers, but it’s safe to say that if you dig yourself a little Weedeater, a little Bongzilla or a little Electric Wizard, you’ll not go far wrong with these battle-hardened sorcerers either.

Embarking on their first UK tour in 2013 in support of their fellow brothers of the DesertFest riff Widows and Tombstones proved to be a clear step up for the band; airing promising new material to sit alongside the likes of the gear-shifting ‘Wizard of Black’ and the growling venom of ‘The Devil Rides’. A further show supporting the mighty Acid King secured their status as ones-to-watch on the UK underground scene.

Don’t be caught stood in a corner wearing a tall pointy hat, grab your staff and lay into the Wizard Fight at DesertFest 2014!