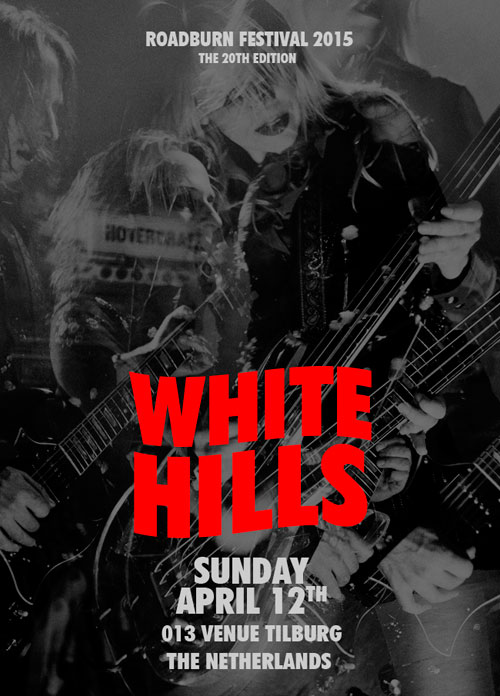 Constantly pushing at the boundaries of order against chaos and speaking a musical language involving fuzzed out guitars, wah-wah pedals and amplifiers turned up all the way, White Hills embody the art and spirit of psychedelic rock.

Nominally from New York, but constantly on tour, White Hills have made quite a mark since 2007, releasing well over a dozen albums (including Live At Roadburn 2011 and the rerelease of Glitter Glamour Atrocity), playing hundreds of shows in scores of countries and even appearing in Jim Jarmusch‘s Only Lovers Left Alive film.

They are a totally worthy standard bearer for a continuum of psychedelic rock music that includes Hawkwind, Spacemen 3 and Amon Düül II.

Combining many of the essential themes of Roadburn music in their volatile sonic elixir — psych, space rock, stoner rock, kraut rock and noise — have made White Hills one of Roadburn‘s favorite bands. Their bespangled and energetic live shows have a life and chaotic energy of their own that reshapes their music and creates powerful sonic programming driven by pure energy, exactly the kind of thing that Roadburn celebrates, and fans seek.

White Hills will make a very welcome return to Roadburn for a main stage performance on Sunday, April 12 at the 013 venue in Tilburg.