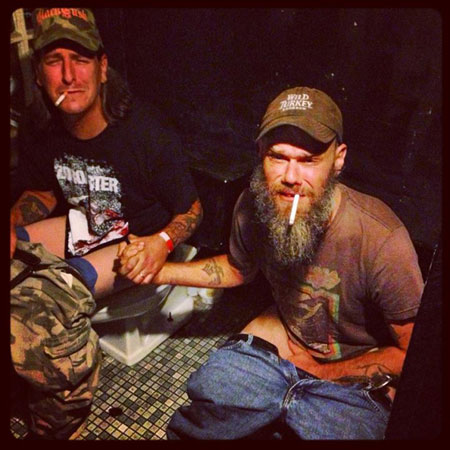 Season of Mist is proud to announce the signing of US Stoner / Sludge act WEEDEATER fuelled by founding frontman “Dixie” Dave Collins on bass and guitarist Dave Sheperd on shared vocal duties.

Conceived in North Carolina, USA, WEEDEATER immediately gained notoriety with their 2001 full-length debut “…And Justice For Y’All“. Setting out on the American tour circuit the band impressed their constantly growing following with the release of three critically-acclaimed albums: “Sixteen Tons” (2002), “God Luck And Good Speed” (2007), and “Jason… The Dragon” (2011).

These four American Metal milestones will be re-released digitally on December 10th worldwide, and the physical reissues will hit the stores some time next year. WEEDEATER‘s forthcoming fifth full-length will also be released on Season of Mist.

Not content to hang around at home, WEEDEATER joined some friends to see the world such as DOWN, SAINT VITUS, HIGH ON FIRE, THE MELVINS, HANK III, EARTH, SUNN O))) and more. The dudes performed at prestigious festivals such as Maryland Deathfest, Hopscotch Festival, Stoned From The Underground, Asymmetry Festival, Roadburn Festival, Hellfest, and many more.

About the signing to Season of Mist, WEEDEATER issued the following statement: “When we heard we would be working with Season of Mist, we almost wrecked our pants. Can’t wait for y’all to check out this shit.”