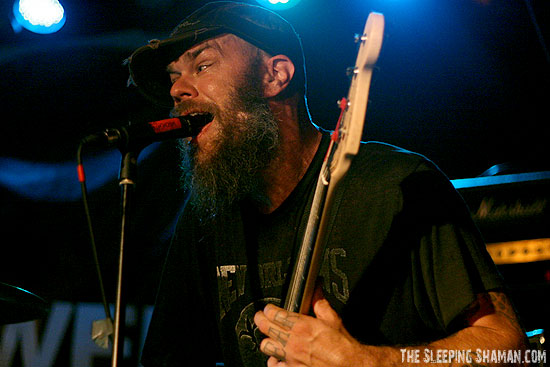 An uncompromising power-trio full of sludge, groove and straight-up metal, Weedeater’s aggressive, bone-crunching madness is quite a sight to behold on stage. Fronted by the manic, growling bassist, “Dixie” Dave Collins (also of Buzzov*en and Bongzilla fame), alongside fret-master Dave “Shep” Shepherd and former sticksman Keith “Keko” Kirkum, Weedeater introduced themselves to the world at large with 2001’s ‘…And Justice for Y’all’. What we got in that record was down-tuned, crashing ferocity; and boy did it feel good. The energy that pulsed through that LP was a jolt to the heart and a kick to the face and it’s a trend that followed right through 2002’s ‘Sixteen Tons’ and 2007’s ‘God Luck and Good Speed’ – the latter of which could find itself easily on many an album of the decade list.

Right around the time of the recording of the fourth LP, Weedeater shot themselves in the foot a little bit in the form of Dixie actually shooting himself in the foot. Gladly, a few months down the line – armed with one hell of an anecdote they gave us ‘Jason…The Dragon’, a slightly more experimental take on Weedeater. The brief appearance of banjo and organ appeared without the loss of any of their earthquaking noise to which we had become accustomed.

As clichéd as it might sound, whilst sublime on record, you just can’t capture the feel of Weedeater until you’ve seen them live; only when you’ve stared into Dixie’s “I’ve seen things” crazy eyes and been showered in the splintered remnants of drumsticks can you really get a grip on them. Must see is an understatement.