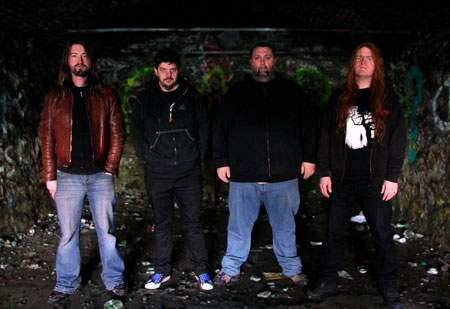 As far removed from the ‘desert’ as you could possibly get comes the two pronged bass attack of Belfast’s War Iron. A tortured band for tortured souls. The bands second release ‘The Fifth and Final Sun’ is set to be released on Punkarama Records in October 2012.

Many bands profess to be heavy but War Iron are a band that can truly defend there moniker. Fuzzed up bass lines downtuned to sonic defying lows and pounding neanderthalic drums provide the concrete slab to the wretched vocals of Andrew Bagwell.

Fans of Iron Monkey, Burning Witch and other equally audio challenging artists can soak up the misery at the Black Heart for the 2013 edition of Desert Fest. Not the faint hearted or weak willed. Prepare.

BLACK MOTH Attracted By The Lights Of London’s Desertfest