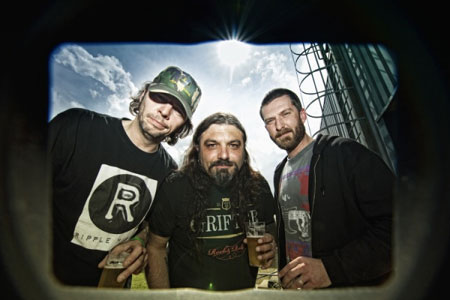 UK-based dirty rock n’ roll trio GRIFTER have announced a string of live dates leading up to their appearance at this year’s Bloodstock Open Air.

The Ripple Music recording artists will be performing on Sunday, August 11th, the same day as Slayer, Anthrax, Gamma Bomb, Exodus, Devil Driver and Amorphis. Specifically, the boys will be taking the stage to support legendary metallers Wolfsbane, as well as Breed 77 and Gormathon!

Bloodstock Open Air (B-O-A) is the UK’s biggest independent METAL festival. Held at the picturesque location of Walton on Trent in Derbyshire, B-O-A has won the hearts and minds of fans of heavy ROCK AND METAL by consistently showcasing the strongest metal line up on UK soil. You can expect some 15,000 metal heads descending on Derbyshire in August 2013 for 4 days of unadulterated full on Heavy Metal!!!

BLOODSTOCK boasts over 100 international rock and metal acts across four stages, as well as other attractions including a huge international metal market, late night entertainment in the Sophie Lancaster Tent, fairground rides, ‘The Bloodstock Arms’ festival bar serving real ale, full weekend camping and one of the best atmospheres the festival scene has to offer. Add to this a signing tent where you can meet your favourite bands, and for those of you who need those extra creature comforts – an extra special VIP experience in the Serpents Lair camping and hospitality backstage bar, which offers 80+ different real ales, this really is an unmissable date in the headbangers calendar. Metal brethren at your marks!

Meanwhile, GRIFTER is finishing recording the follow up to their self-titled 2011 debut, which will appear later in the year on Ripple Music on CD and…VINYL!!!! Guinness splatter vinyl no less!!!

The working title for the album is The Return Of The Bearded Brethren and will feature artwork from up and coming tattoo artist Jamie Campbell. Tracks from the album will include ‘Braggard’s Boast,’ ‘Black Gold,’ ‘It’s Not Me It’s You,’ ‘She Mountain,’ ‘Princess Leia,’ ‘Fire Water,’ ‘Paranoiac Blues,’ ‘The Return Of The Bearded Brethren,’ ‘Bow Down To The Monkey’ and a cover of Black Sabbath’s ‘Fairies Wear Boots’ that has become a popular fixture of the live set.