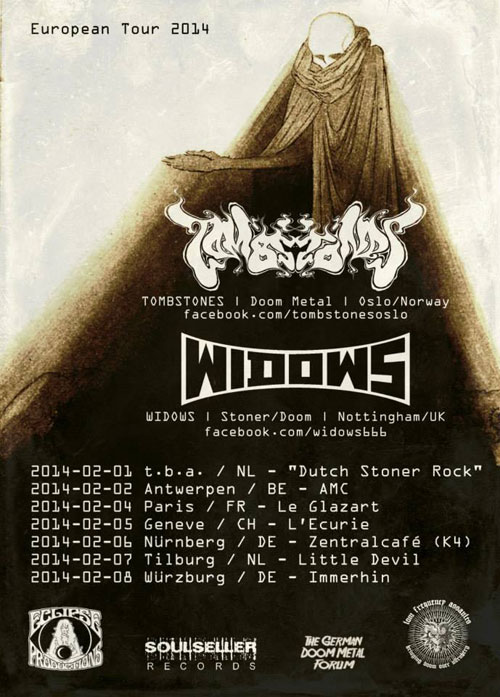 In the first week of February, Eclipse Productions brings you Northern Doom, set to captivate the European continent. The ultra-heavy Norwegian three-piece TOMBSTONES team up with UK groovers WIDOWS for a 7-day trail, visiting The Netherlands, Belgium, France, Switzerland and Germany.

TOMBSTONES’ highly acclaimed album “Red Skies and Dead Eyes” was released in October by Soulseller Records, and has featured in many end-of -year lists and has received rave reviews from web- and fanzines throughout the world, including the likes of Terrorizer, Visions Magazine and Metal Hammer. In 2013 the band blew minds with three bludgeoning sets at Desertfest in London, found themselves supporting bands such as Clutch and Ufomammut, and are now ready to once again bring their crushing live act across Europe. TOMBSTONES can be described as the bastard child conceived by a filthy threesome with Sleep, Melvins and Bongripper.

Nottingham-based WIDOWS play music you can raise a beer and swing a fist to and they do it hard fast and loud, with bone crushing grooves and undeniable swagger!Influenced by the likes of Down, Kyuss, and Clutch, WIDOWS have spent the three years since the release of their debut EP (2010’s Raise the Monolith) building up an ever more impressive live set as they chewed up, spat out, and pounded venue after venue into submission, adding weight to their sets with regular new tracks and building the collection of songs that would later become their debut full length CD, Death Valley Duchess.