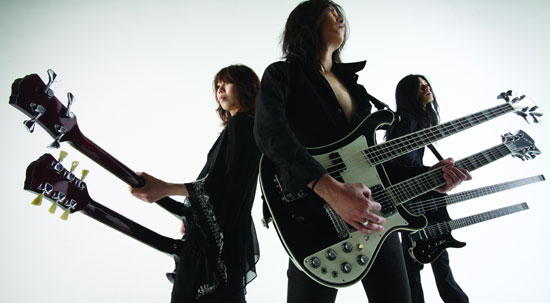 And so the DesertFest Crew announce their final headliner for DesertFest London 2014 – Japanese experimental legends Boris!

How on Earth can you capture Boris’ sound in words? It’s beyond impossible; from drone, to sludge, to doom, to psyche, to ambient, to noise rock, to pop, here is a band that you can’t pigeonhole. But it’s in that unpredictable, ever-marching progression that the excitement lies.

Boris formed in 1992 on the extreme fringes of the Japanese hardcore punk scene before flying in every musical direction you can think of. Spending most of their life as a multi-instrumentalist three piece – consisting of Atsuo on drums, Wata on guitar and keyboards and Takeshi on bass, with all three sharing vocal duties – Boris have released just shy of a couple of dozen full lengths in their time on this mortal plane, with no two sounding too alike. Notable influences on Boris are Sleep and The Melvins – which might explain their high yield of records – as well as Nick Cave and even Venom.

The best starting points for a Boris exploration are 2005’s ‘Pink’ –which is perhaps one of their more accessible albums for the casual listener, yet still full of their signature leaps and bounds – and both 2002’s ‘Heavy Rocks’ and 2011’s ‘Heavy Rocks II’ which sit on a more laid back, straight-up stoner rock scale. If you’re more into drone, why not start with the first few releases; or even better, ‘Alter’, a phenomenal collaborative double album with SunnO))). Or you may want to try something completely different, in which case enter the batshit crazy world of 2010’s ‘New Album’ – a blend of J-Pop, shoegaze, psyche and industrial metal. The point is, these guys can do anything, and do it bloody well!

So if you want your mind blown by a band who don’t only surprise you with what’s around the corner, but change the shape of the corner itself, then you must get yourself down to the Electric Ballroom on Sunday night and stand both slack-jawed and in awe. Oh, and if you’re still not convinced, they also incorporate a massive gong into their shows, which is reason enough to be there.