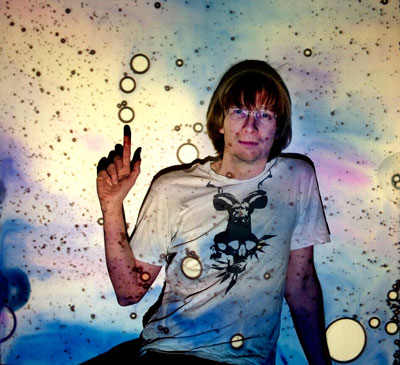 kandodo is the solo project of Simon Price, singer/guitarist of The Heads. Price was raised in Zambia and Malawi, which left an indelible mark on him personally, and is manifest in the song titles, artwork, and name of the project. The influence is less obvious on his instrumental music, but Simon says that if there were lyrics, they’d be about animist religions, hyenas, sharks and dusty drives. Named after a Malawian supermarket that he used to shop in back in the late ‘80’s, the debut self-titled album contains mini-sonic soundscapes that start firmly grounded and then go off into the deepest reaches of space. Along the way, Simon touches on influences as diverse as Kraftwerk, Neu!, Eno, Morricone, Stooges, Loop, and Spacemen 3.

kandodo is for Price an exploration of tones, chords, and textures that evoke a very particular emotional response, a sense of yearning. These instrumental pieces are lyrical and evocative soundtracks with an elongated and elegant song structure. Describing them himself as “fuzzy lullabies”, Simon’s pieces undulate as delicate layers are built and removed, easing the listener along a thread of melodies. This is immersive music meant to be listened to at a loud volume or in the space between headphones.

All of the tracks on kandodo were played, recorded, and mixed by Simon over a lengthy period of time on an old second-hand Mac Book at home. Being one of the first solo recordings he’s ever done, the time alone and the lack of other bandmates allowed Simon to indulge in an infinite amount of possibilities. Many revisions were made over time but the tools used were actually quite few: just his guitars (though Simon is a Fender fetishist, a ‘65 Magnatone Typhoon was mainly used on this album), a couple of keyboards, tambourine, drum pedal, and a slowly breaking Walkman recorder (for field recordings). The end result is a remarkable addition to the guitarist’s already impressive body of work.

kandodo will be released on 11th June 2012 via Thrill Jockey Records on CD and Gatefold LP.