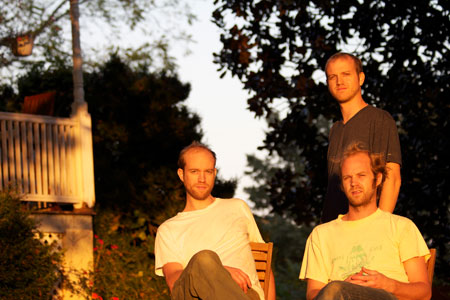 On a return trip from South by Southwest, the three brothers who make up PONTIAK conceived of recording an expressionistic record. Something unlike anything they had tried before. They imagined it as a color project, painted through music, favoring the traditional form of the song to explore texture and color. The album was an ambitious undertaking and would require deconstructing and then rebuilding their studio in order to be able to record it the way they envisioned it.

The first step was to find a new mixing board. They found a Soundcraft 6000 24 track analog mixing board for sale on an exotic animal compound in Arkansas. To their surprise it was tucked away in a
studio next to giant Moog synthesizers and had been used to record Herbie Hancock. Board in hand, they returned home and began rebuilding their studio to capture both the band’s heavier sound and the
melodic nuances they’re becoming known for. They focused on the acoustic properties of the space, paying great attention to the subtly of the room. After a detour to the Austin Psych Fest that involved tornadoes and chainsaws, recording began immediately.

Recorded at their farm studio in the heart of Virginia, Van, Lain and Jennings rotated between their respective instruments and engineering duties. They treated the recording equipment as another
instrument, placing just as much importance on the sound leaving the amps and drum skins as the sound written on the tape. If it wasn’t as colorful and tangible throughout the entire songwriting process it was unacceptable.

While previous Pontiak albums had been approached more loosely as snapshots of a specific time, focusing on the current songs, and their current energy, Echo Ono is different. It was
conceived of as an album. Instead of recording hours and hours of songs and then fitting the best pieces together, careful attention was paid to the narrative of the album and the structure of the songs as well as how each directed that narrative. What was left to chance was what would happen when the band pushed these structures to the extreme in performance and volume. The band used several different amps to test these boundaries: a 1969 Fender Dual Showman Reverb, a 1973 Sunn Model-T, a 1969 Sunn 200s, a 1975 Fender Bassman 100, a Vox AC30, and for effect an Echoplex tape delay. Lain used two drum sets: a 1946 mahogany Slingerland Radio King set with a matching solid maple snare, and a 1967 maple Ludwig kit. No distortion or overdrive pedals were used. If an amp started to act unpredictably, they turned it up. If a speaker started rattling, they pushed it.

As the summer began to wind down and the album took shape, it became clear that they had realized their love of texture and color that loud music produces. Music so loud it produces physical vibrations in your chest. Echo Ono felt like a complete whole, as well as their most concise and direct album to date. It was like walking to the top of a hill in a field and watching the sky expand, a vision fully realized.

PONTIAK have also confirmed a string of European dates in support of the release of Echo Ono and you can catch them at the following venues: