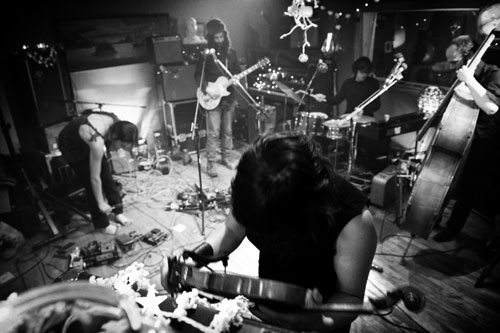 Here’s the first of Constellation‘s new releases for 2014: Fuck Off Get Free We Pour Light On Everything, the first new full-length from Thee Silver Mt Zion Memorial Orchestra since 2010’s Kollapse Tradixionales. The band will be hitting the road early spring, see below for the first batch of dates in the UK/EU, and you can hear an excerpt of album track “Austerity Blues” on Soundcloud HERE and a video made by the band for the occasion below:

Thee Silver Mt. Zion Memorial Orchestra (SMZ) has traced a barbed-wire arc of genre-defying protest music since its inception in 1999. Formed by Efrim Menuck, with Thierry Amar and Sophie Trudeau, the initial iteration of the band was a predominantly instrumental trio that forged a more intimate and ragged chamber-punk than Godspeed You! Black Emperor, the other group in which all three founding SMZ members also played (and continue to play). Through seven albums from 2000-2010, SMZ expanded its line-up and shifted towards an increasing use of lead and group vocals, with Menuck penning politically-charged lyrics to anchor long-form multi-movement compositions that juxtaposed electrified guitars against a 4-piece string section of violins, cello and contrabass.

Most recently, SMZ has pared back to five players, with Menuck’s massive spectrum-spanning electric guitar sound emerging as the spine around which two violins, bass (now more often electric than acoustic) and drums are deployed. SMZ have managed a handful of short tours in the past couple of years (in the gaps between GYBE commitments) and as anyone who has seen the band in its recent incarnation can attest, their current sound is more honed, laser-guided and bone-rattling than ever, melding hardcore, blues, garage and dark metal influences that have nothing to do with anything so quaint as “post-rock” (a tag the group has always and rightly rejected). 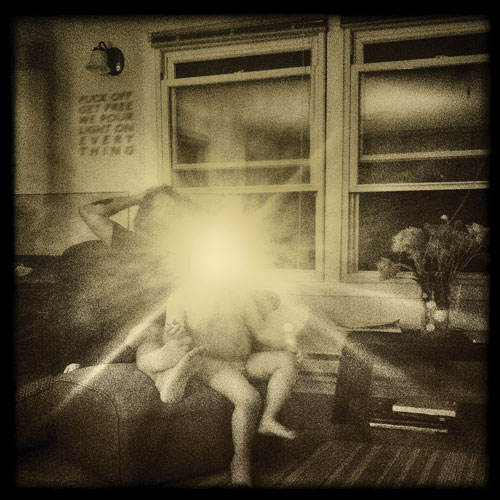 Fuck Off Get Free We Pour Light On Everything is the first definitive document of the band’s newfound sound and style as a quintet. It’s also their first single LP-length work since the band’s debut record as a trio almost 15 years ago, and features road-tested pummelling rock-outs “Fuck Off Get Free (For The Island Of Montréal)”, “Take Away These Early Grave Blues” and “What We Loved Was Not Enough” alongside the previously unheard lullabies/minuets “Little Ones Run” and “Rains Thru The Roof At Thee Grande Ballroom (For Capital Steeze)” and the album centrepiece “Austerity Blues” with its closing lyric “Lord let my son live long enough to see that mountain torn down” sung in varying incarnations throughout the second half of this 14-minute epic.

This lyric in many ways encapsulates Menuck’s unflinching take on a world replete with shabbiness, greed and injustice, seen through the lens of parenthood, mortality, endurance and defiance. There are few other musicians who deliver social critique with the courage and honesty of lines like “All our cities gonna burn / All our bridges gonna snap / All our pennies gonna rot / Lightning roll across our tracks / All our children gonna die”. Feel-good music this is not; but neither can it reductively be tagged apocalyptic or world-weary. Fuck Off Get Free rages with scorn and with hope, utterly passionate but pointedly unromantic.

Thee Silver Mt. Zion once again demonstrates, like few other bands working today, that there is much to fight for and against, and plenty more fight songs to sing.