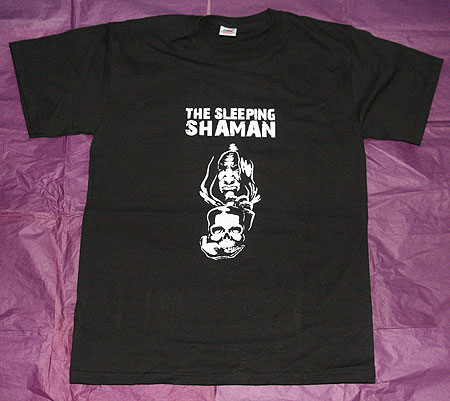 I’ve been umming and ahhing about printing some The Sleeping Shaman T-Shirts for a while now, but my indecisiveness did an about turn recently when the opportunity of having some awesome artwork commissioned by Matt of Orphic Art (who also plies his trade in Psychedelic Doomers Sleestak) became available so I grabbed it with both hands.

And today, I couldn’t contain my excitement when a lovely parcel landed at Shaman HQ with the swanky new T-Shirts which feature a white on black print in sizes M, L & XL.

They will initially be available for £10 at this year’s Supersonic Festival on the Future Noise stall in the Market Place, so if you’re there, come and say hello, then any remaining shirts will be sold online via this site.

I’d also like to say a massive thanks to Matt for the Artwork and to Pete of AMS Screen Printing for making them a reality.