The Secret kick off their Irish/UK tour next week…
Here are the dates: 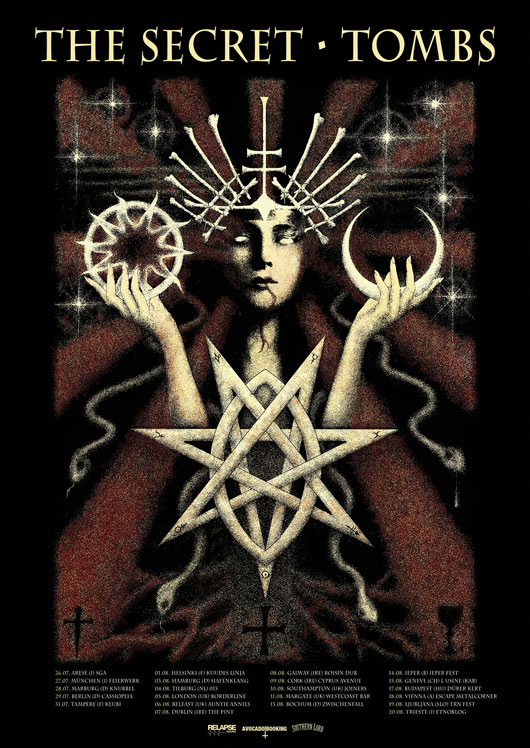 These days Its extremely rare that we receive a demo submission that blows us away. This was the case with the demo that the Secret had sent us. Their sound is relentless, uncompromising and extremely lethal. Anti-melody, pro-cacophony! Born and shaped in 2003 within the motionless city of Trieste, Italy, The Secret come to life as an output for rage, darkness and negativity. The Secret combines elements of crust/grind, primitive black metal, dark soundscapes and monolithic riffs to take the listener by the hand through an hallucinated trip towards a foggy and yet invisible tomorrow. After their 2003 Goodfellow Records debut album “Luce”, the band goes through countless line up changes and finds its own new incarnation in 2008 when their second full length “Disintoxication” was released. Since then The Goodfellow label has unfortunately ceased to exist. The Secret have now found shelter within Southern Lords’ bleak caves. This April The Secret will enter Godcity Studio in Salem, MA with producer Kurt Ballou to record their Southern Lord debut “Solve et Coagula”, their sonic interpretation of a total loss of faith in social system, religion, personal redemption and every institution. You are forewarned of a approaching monolithic steamroller whose destiny is to flatten all in its path!

“The last man standing tall that year went home and put his head in the stove, and his wife in the other room just screamed to let him know that he was not alone. “It’s alright!….I know what you are and I know there’s no way to talk you out, and I’ll tell them that you tripped and fell and I’ll let them harbor their doubts.” His kids all stayed in bed with duct tape thoughts, said their prayers to the ceiling fans and stared at all the shadows left on the wall from the shining limbs he left in the sand. No one got in the way as he burned against the barnyard red of a happy home amidst brilliant times and no one called the helpless card because everyone lives a lie. Everyone loves a lie. They know what’s been done. They know the way the words get mixed and the actions find a way to wrap themselves around the seemingly solid frames of modern hope and modern sight. It’s not just passion….nor unending will. No, if it was just that, then every sad pair of eyes would be able to get out of bed and make it through the front door. There is more, and I know you drink from the same well, and that you shared the similar mirage on cue that somewhere slaughter and rescue moonlight ‘cross land and sea as one in the same. . They come by way of spite. They come by way of brilliant disgust with rage tattooed deep into the palms. They come by way of blackened city lights and by trails of sonic bliss. This a not a warning. Warnings give the false hope of finding sudden shelters to crawl behind. This is the darkened life of four, without an absolute in sight. The Secret come by way of filth and promise. That, my friends, makes them a danger….the kind that you rarely have an opportunity to run into head on. The only difference is The Secret won’t stop until they’ve run straight through each and every one of you. This is the darkened last will of four with distortion brought to life.” – Ryan J McKenney/Trap Them

You can also read Pete Green’s review of ‘Solve Et Coagula’ on this very site here.