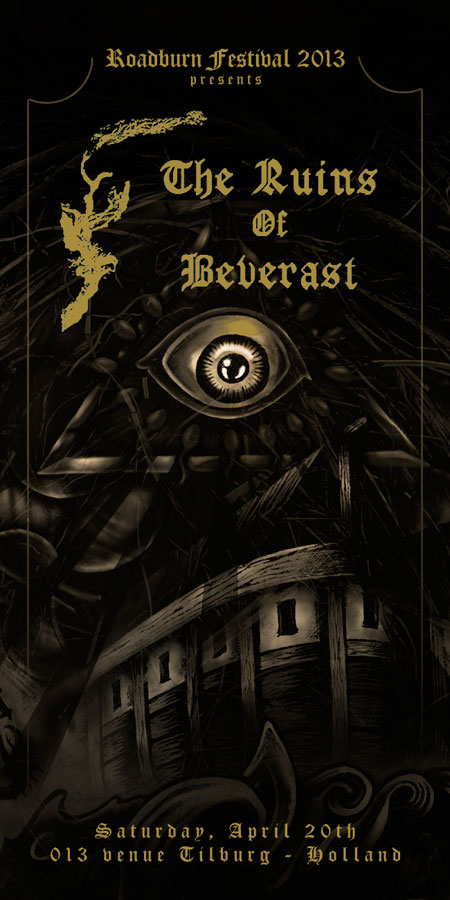 Roadburn are elated to announce that Meilenwald‘s The Ruins of Beverast will play its first ever major performance at Roadburn Festival 2013, set for Saturday, April 20th at the 013 venue in Tilburg, Holland.

Former Nagelfar drummer and main songwriter Meilenwald has pushed the boundaries of black metal like no other before him, creating a unique musical landscape firmly rooted in classic black metal, but underpinned by grimy doom, swampy dirges, churning industrial music, arrays of ambient / experimental passages, and most surprisingly, occasional strains of melodic pop.

The Ruins of Beverast‘s haunting but also sinister albums (Unlock The Shrine, Rain Upon The Impure and Foulest Semen of A Sheltered Elite), deliver exotic, otherworldly music founded on plodding blackened doom. But that starting point is then exploded into shards of brain-rending shrapnel that is rife with unexpected leaps into extremely complex operatic or symphonic passages interspersed with interludes of ambience and heart-wrenching melodies. The variety and inspiration of these musical / artistic masterpieces makes them a must have for all fans of blackened-doom, as well as those in the vanguard of avant-garde music.

As a mythological symbol, the ruined bridge of “Bifröst” — the original ancient nordic expression for the old German word “Beberast” which Meilenwald modified to Beverast — symbolizes the end of the world, and the lyrical content of The Ruins of Beverast reflects a bevy of related interests that include religion, ancient warfare, and even science fiction.

Stream The Ruins of Beverast latest album, Foulest Semen of a Sheltered Elite, in the YouTube Clip/Playlist below.