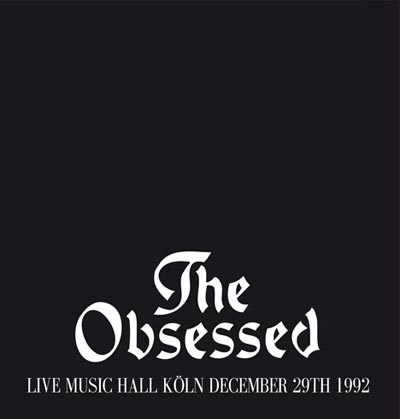 Roadburn Records is proud as a peacock to announce the release of the first slab of black vinyl from The mighty Obsessed in many years. Live in Koln December 29th 1992 captures the band live at their peak and is released to celebrate the bands come back on Roadburn on April 14th 2012. This one will be vinyl only.

The record (and shows) will be featuring the lineup from The Church Within; Scott “Wino” Weinrich on guitar/vocals, Greg Rogers (Goatsnake, Sonic Medusa) on drums and Guy Pinhas (Acid King, Goatsnake and Beaver) on bass.

The album will first be available at the Roadburn Festival in Tilburg on April 12th 2012. All pre-orders that will be picked up there will include the limited edition 7″ that goes with the album with two secret never before released tracks. All other copies will not include the single.

If interested please order HERE from Burning World’s online store. Upon payment with Paypal please mention “Roadburn pick up” and they will refund you your postage (there system does not provide an option with no payment for shipping, sorry). If you pick up other items along the way, the same “no postage” will apply of course.