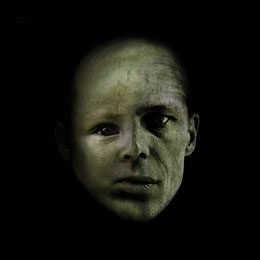 Writing critical music without using platitudes…
…that’s already a difficult undertaking if you’re doing music supported by words. THE EYE OF TIME realizes a critical approach without any lyrics. Why did he choose this way of expression?

The man behind EYE OF TIME – Marc Euvrie – grew up in and was part of the French diy punk and hardcore scene for years. After playing with several bands THE EYE OF TIME is his first solo project – just for the live gigs he invites different friends to perform with him. The song writing process itself wouldn’t work out together with other people –THE EYE OF TIME is Marc Euvrie’s personal reflection of the world – illustrated with his sounds and specific artworks Thomas from Denovali Records worked out together with him.

After six years of writing song fragments and two additional years of creating the artwork elements he now presents his self titled debut record consisting of the three parts AFTER US, JAIL and LILY ON THE VALLEY. All tracks on the record are telling you a specific story dealing with Marc’s life – every picture in the booklet gives you a little hint concerning his view to the world. The stories behind the tracks are dealing with problems of our today’s society just as with his personal fight against depression and hopelessness.

He doesn’t present his art with pathos – it’s a clear, minimal mixture of samples, cello elements written and performed by himself, electronic programming, loops, drones, piano parts and field recordings. It’s an honest soundtrack of life garnished with hope, resignation and death.

Comfort, design and graves: we are corpses; walking dead; we sold our humanity and dreams against consumption; Dreams are gone; nobody takes any risks to change something; even the poor guy has something to loose (His cellphone, tv, car?); we are ghosts in the supermarkets of life;

After us : humanity is running against a wall – crashing….. even if the human race dies off from one day to another the earth will still have our stupidity as a memory; even if something is changing, we can’t go back; a second of human reign, for an eternal life of earth.

What am I less? What took the road? : Hope? I’ve been thinking about it so much; being depressed, trying to have hope again, and always get down for some reason; Hope brings you high to give you a better letdown;. Hope is a bitch; I’m not depressed – but sometimes you just think that some situations would end better without having hope.

“Man has been depossessed of his possibilities for adventure and experimentation that life should give him. We let mankind become obscure and extinct, because we don’t take any risks.”

You can also view the amazing video trailer for the massive new release by THE EYE OF TIME below.