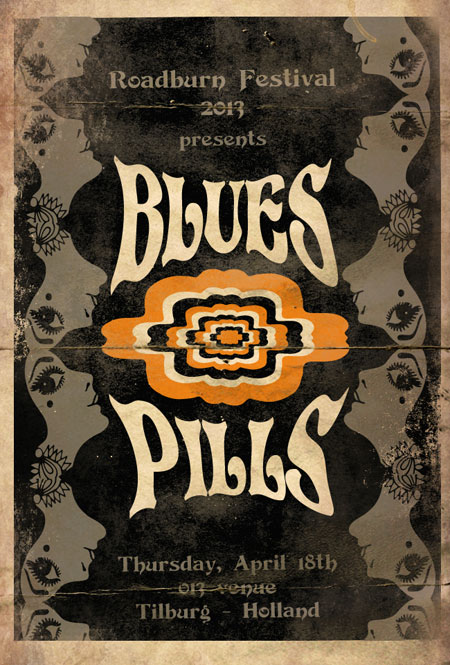 Walter & Co are very pleased to announce that Sweden’s Blues Pills will be making their appearance at Roadburn Festival 2013 on Thursday, April 18 at the 013 venue in Tilburg, Holland.

After their abrupt departure from Radio Moscow, drummer Cory Berry and bass player Zack Anderson grouped with classical-trained Swedish lead singer Elin Larsson and French guitar player Dorian Sorriaux to form Blues Pills, a dynamic hybrid between blues rock of the 60s and the heavy 70s. Think heavy, driving bass lines, colossal drums and ferocious, riff based, soul-penetrating guitar work, tied together by the incredible soulful voice of Larsson, sometimes singing in her mother tongue, and whose timbre, range and power is reminiscent of Susan Tedeschi and Janis Joplin.

Blues Pills‘ sound is very diverse as shown on Bliss, their 4-track debut for Crusher Records. The band has put lots of emphasis on both dynamics and emotion by bringing out beautiful harmonics, escaping the the typical 12-bar form for Peter Green‘s Fleetwood Mac-inspired melodies and a more progressive Zeppelin-like structure.

With our fondness for Swedish rock (we have invited the likes of Witchcraft, Graveyard, Dead Man, Horisont, Troubled Hourse, Spiders et al to previous festivals) it’s not surprising that Blues Pills are appearing at Roadburn 2013 and not just because they are Swedish…but because they bring out the best heavy 70s inspired rock we have heard in a long time.