Even though the SLEEP OF MONSTERS debut album has so far been available in Finland only, the news that the Babylon Whores crooner Ike Vil has a new band has crept out of the country and circulated among those in the know. Svart Records, having recently reissued the entire Babylon Whores back catalog on vinyl, are proud to, in conspiration with the band, offer the album for worldwide consumption.

Chock-full of radio-friendly yet still spine-tinglingly witty, snotty, and deathly melodic mélange of acidic rock, cadaverous crooning, and Pink Floyd-type siren choirs, SLEEP OF MONSTERS‘ Produces Reason is an album that many in Finland already considered one of the top debuts of last year. In a way, it’s no surprise, as these guys are no novices: vocalist and lyricist Ike Vil was the morose mastermind behind the lauded death rockers and occult rock pioneers Babylon Whores (with two subsequent “Album of the Month” titles in Terrorizer magazine), guitarist and main songwriter Sami Hassinen was the guitarist of Blake (featured in Bam Margera’s Viva La Spring Break TV show), drummer Pätkä Rantala played on HIM’s million-selling debut, and keyboardist Janne Immonen has toured extensively with Waltari and Ajattara. The sound of SLEEP OF MONSTERS is completed by the guitar wizardry of Uula Korhonen and the thumping bass of Mäihä, who also handles backing vocals, and last but not least, on selected tracks, amplified by the witchy voices of their own “Furies”: Hanna Wendelin, Nelli Saarikoski, and Tarja Leskinen.

Recorded at EastSound Studios in Helsinki by producer Pekka “Splendid” Laine (LAB, 45 Degree Woman), Produces Reason offers 10 sticky, sweetly bitter, and artfully accessible songs plus the previously unreleased bonus track “I Am The Night Color Me Black.” Yes, Vil plays with words and twists Goya to contrive that title, and the well-read will be aroused by the vocalist’s impish bastardizations of Samuel Coleridge, Carl Gustav Jung, or obscure German texts. But one needn’t be bookish to feel the warm cloak of SLEEP OF MONSTERS‘ iridescent ambience, the enveloping swath of deep purples and shadowy greys and midnight black.

SLEEP OF MONSTERS‘ Produces Reason will be released internationally via Svart Records in September 2014 as a digipak CD and a gatefold LP. Cover and tracklisting are as follows: 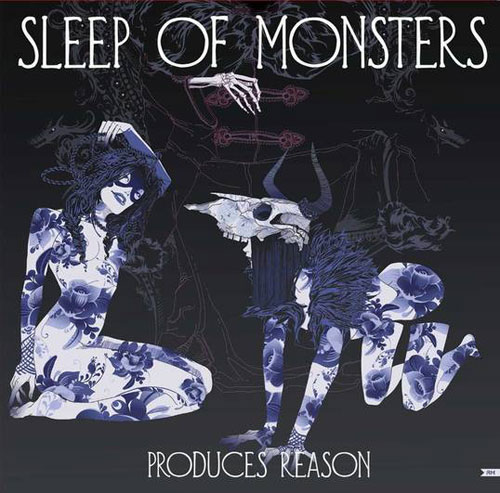 Tracklisting for SLEEP OF MONSTERS’ Produces Reason
1. Holy Holy Holy
2. Nihil Nihil Nihil
3. Abomination Street
4. Murder She Wrote
5. Christsonday
6. Our Savage God
7. Horses Of The Sun
8. Through A Mirror Darkly
9. Cobwebs Of Your Mind
10. Magick Without Tears
11. I Am The Night Color Me Black (bonus track)

In the meantime, the curious are encouraged to check out the official lyric video for the track ‘Murder She Wrote‘ below: