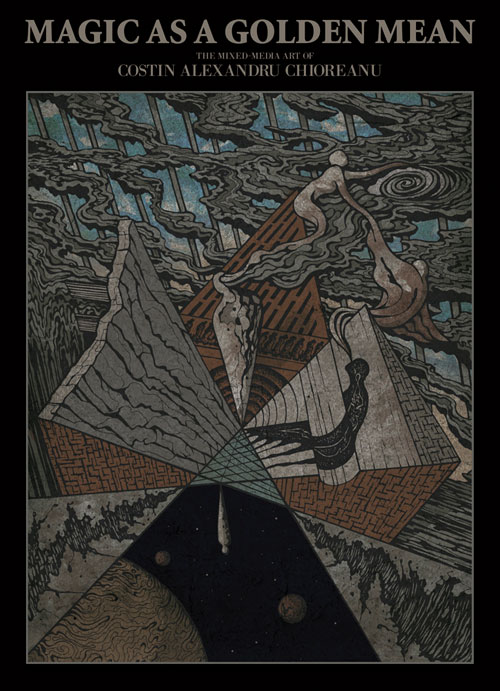 The publishing wing of Svart Records, which kicked off this month with the legendary Isten Fanzine compilation, continues in April with Magic As A Golden Mean, which is a selection of mixed-media artworks by Romanian artist Costin Chioreanu. The hardcover book will be launched at Roadburn Festival in Tilburg, Holland in April 2015.

Costin has been creating album artwork for over a decade. He started out illustrating his band’s demos, but would soon be influenced by circumstances in post-Communist Romania, too. In the mid-1990s, metal fans in Bucharest were lucky to find bootleg cassettes with badly photocopied covers. Undeterred, Costin simply made his own using Heavy Metal Magazine, the country’s sole heavy music publication, as a reference.

Today, he has emerged as one of the most talented artists in the realm of avant-metal and dark psychedelica, producing work for the likes of Darkthrone, Ulver, At The Gates, Triptykon, and Opeth. Whether the images he conjures are disturbing, provocative, or enchanting, they consistently show great finesse, sensitivity and depth.

Comments the artist himself, “This is my first book, and it contains a fine selection of mixed media arts I made in the last years. After 12 years of working with bands, booking agencies, festivals, record labels, promoters, and studios, I realized the common denominator of the events in my creative life is indicating actually the golden mean. Working with same passion and dedication for dark and light entities made me realize that I am always the one in the middle, and I will always need both sides in order to evolve to a higher state of understanding of the world around me. So, the artwork selection was divided in three big chapters – one is related to darkness, one is related to light, while the closing one is related to magic and the middle path. So, in my case, the ‘golden mean’ represents the magic of manifestation, the desirable middle between two extremes, marked by darkness and light.”

Costin has contributed to the visual side of Roadburn since 2012; he has provided the official festival artwork for two years in a row, background images for live sets, produced incredible lineup posters, and everything in between. He has left his indelible mark on Roadburn Festival.

More information about the book launch will be made available in the coming weeks.

The 20th edition of Roadburn Festival will run for four days from Thursday, April 9 to Sunday, April 12 at the 013 venue in Tilburg, The Netherlands. Get your tickets HERE.