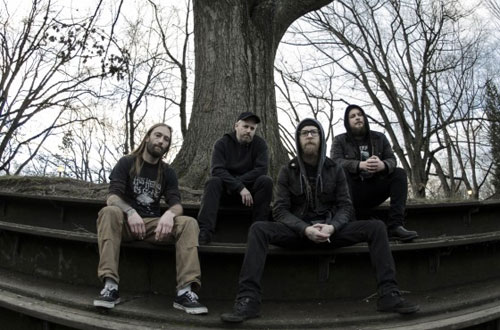 States the band simply, “The grey, rainy weather has finally hit us here in Portland, and we’re feeling like getting out of the house…”

With a focus on domination through amplification and soul-cleansing catharsis, STONEBURNER features a persuasive musical ancestry that winds through Buried At Sea, Buried Blood, Heathen Shrine and others. Named after a subterranean weapon from the novel Dune, the STONEBURNER collective vomit forth a groin-churning orchestration of wholly absorbing, crustified doom metal, their torrid hymns bathed in internal agony, anguish and despair. To define STONEBURNER, one need only look to the list of bands with whom they’ve shared the stage: Yob, Sleep, Eyehategod, Neurosis, Buzzov-en, Weedeater, Saint Vitus, Watain, Tragedy, Noothgrush, Graves At Sea, Lord Dying, Drop Dead, Whitehorse, Wind Hand, Bastard Noise… Life Drawing, the follow-up to their 2012 debut, Sickness Will Pass, which The Sludgelord fittingly christened “an ugly, visceral and truly terrifying beast of an album,” promises to take their chest-caving sludge anthems to entirely new levels of earth-decaying heaviness.

Further STONEBURNER info, including official release dates and track listing, will be unveiled in the coming weeks.