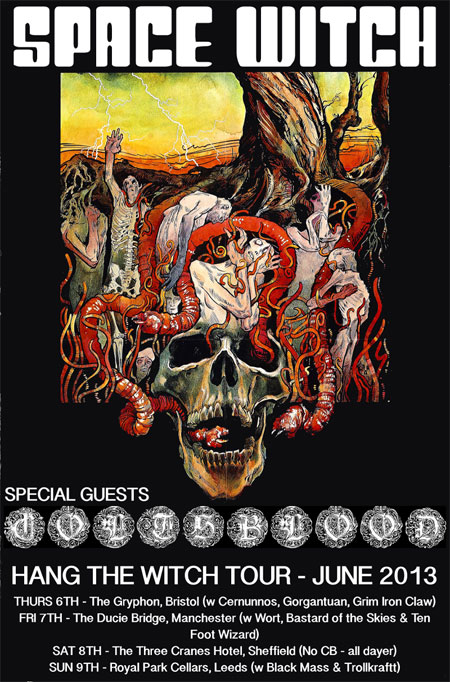 In support of their recently released EP ‘The Alchemy Paradox’ Cosmic Overlords SPACE WITCH will be hitting the road during June 2013 for a short UK tour and they’ll be dragging along recently formed Blackened Doomers COLTSBLOOD who feature John McNulty (ex Conan & Black Magician) on Bass/Vocals, the tour dates are as follows:

‘The Alchemy Paradox’ is a 30 minute DIY release of instrumental postdoom. It was recorded DIY style (badly with minimal recording equipment – warts an all) by the band at Star Trak Studios, Stoke-on-Trent on January the 28th/29th 2013 and captures the bands sound at their rawest form as a trio. The EP was mixed and mastered by Nathan and Tom at The Universal Thrift Club Music Studio, Stoke-on-Trent.

1. Hang the Witch (12:57)
A piece that reflects the journey of emotions going through a long term relationship breakdown. Chaos, loneliness and acceptance.

2. Cosmic Cauldron (13:45)
An old school track that has grown since its inception. The exploration of time, all things funeral and slushiness. The span of life reaching its eventual conclusion a fixed point in time.

3. Black Pyramid (06:08)
The realisation that our lives are controlled by a structure put into place well before our time. Religion, Governments and Credit Systems that fix our boundaries in life. Denial, realisation and then avoidance.

Orders for the EP can be made on the SPACE WITCH Bandcamp page HERE.