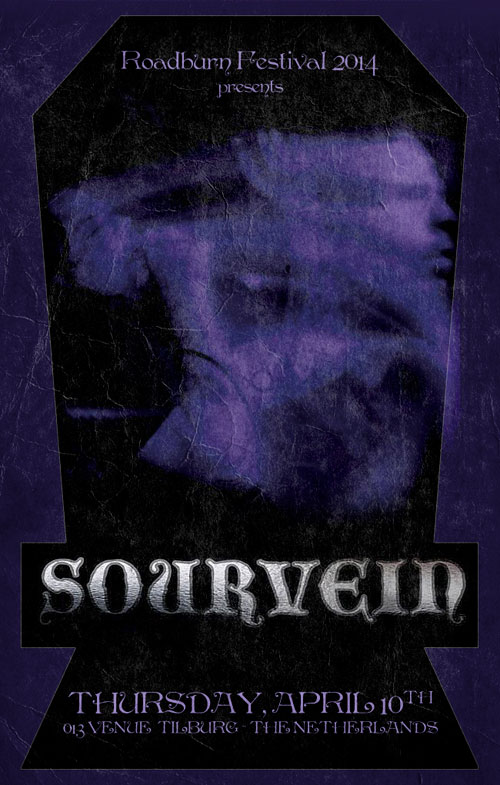 Led by T-Roy Medlin, Sourvein have been one of America’s premier, uncompromising, doomed sludge-acts for the past twenty years, and we’re stoked to announce the band’s return to Roadburn Festival 2014 on Thursday, April 10th at the 013 venue in Tilburg, The Netherlands.

Over these troubled decades, Sourvein have always excelled at delivering damaged, blackened misery and pulverizing heaviness, thriving on brutal riffmongering and T-Roy’s vicious vokills, which prove to be a much darker and scarier proposition than most fellow dope-lope heavies.

Sourvein keep things simultaneously dirty but also pure and simple – there’s nothing flashy about the band. T-Roy‘s raw, fucked-up, gritty emotions drag you down into a nasty swamp of sickened sludge, leaving you ready to die or amped up to kill and escape.

Either way, Sourvein will be ratcheting up the sheer brutality of their relentless sludge by playing all three of the band’s much acclaimed EP’s, Emerald Vulture, Ghetto Angel and Imperial Bastard, in their entirety exclusively at Roadburn Festival 2014.

“We’re beyond excited to return to the mighty Roadburn Festival on our 20th anniversary tour” says T-Roy, “and this year we have a very special set prepared just for the Roadburn crowd. We will be doing our trilogy” live, all 3 EP’s back to back and some songs off the first record that we’ve never done live… So we really look forward to this being an awesome time. See you at Roadburn 2014.”