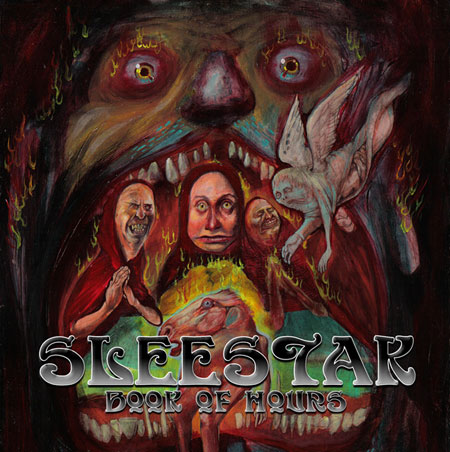 SLEESTAK have announced their forthcoming EP ‘Book Of Hours‘ for self-release at the end of May. Having taken a break from writing the next epic full length album and experiencing the first lineup change in ten years, the band decided to get down to basics as a three-piece and write some songs where they could just let loose the power of the riff. The five songs contained on ‘Book Of Hours‘ pay homage to the pioneers of heavy, bluesy, stoner metal in the vein of early Sabbath and Cream while giving a nod to contemporary bands such as Sleep and Clutch.

Recording is set to begin April 10, with the band once more entering Bobby Peru’s Recording Studio in Milwaukee, Wisconsin. Behind the controls will sit long-time friend and mixologist Shane Olivo who produced all previous studio recordings of SLEESTAK. Cover art was created by Steve Somers.

Pre-Orders are now being taken for the CD and Digital Download versions at their Bandcamp page http://sleestak.bandcamp.com – and will be limited to a total of 100 for the physical copies. All CD orders will include new sticker designs as well as the digital version. Bonus material is also being planned for inclusion.

In the coming weeks, SLEESTAK will be releasing excerpts of the songs so please visit Bandcamp HERE, their website HERE and you can like them on Facebook HERE.