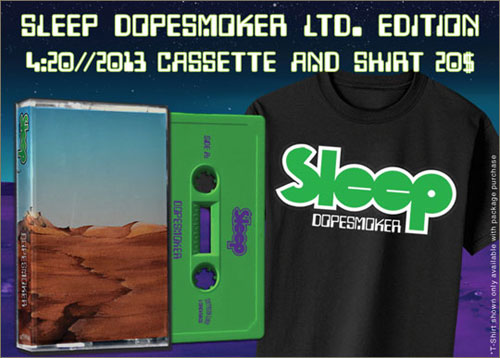 It’s now been nearly one year since the practitioners of Southern Lord Recordings were bestowed the honor of releasing SLEEP’s legendary Dopesmoker album and fans’ and critics’ response continues to be overwhelming! Thus, the label saw it fit to repress the vinyl edition again, just in time for the one year anniversary (April 20, 2013). Additionally, the label has committed the album to cassette!

Dopesmoker stands as one of the towering achievements in recent metal history: a mesmerizing, intoxicating, and incredibly complex composition that remains unrivaled in the evolution of stoner metal. Alarm Magazine christened it “a monolith of metal,” MSN echoed the sentiment calling the record, “one of the most influential stoner/doom albums ever recorded,” while Pitchfork crowned Dopesmoker “Best New Reissue” last year noting, “it’s an hour of adventure and momentum, where the lumber and the repetition somehow always push ahead. At a moment when black metal reinventers and D-beat revivers seem to dominate large sections of the heavy music world, maybe the thought of a resin-voiced singer intoning for an hour over riffs that wrap into themselves and drums that aim ever for infinity seems boring. But no matter how many times they had to record or rehearse ‘Dopesmoker’ to master it, or no matter how much pressure London placed on them to make something more commercial than personal, SLEEP sound as if their very existence depends upon the successful exercise of this weed ritual…. This record’s influence on substance, style, and simple ambition within heavy metal has long outlived the band that made it. “ 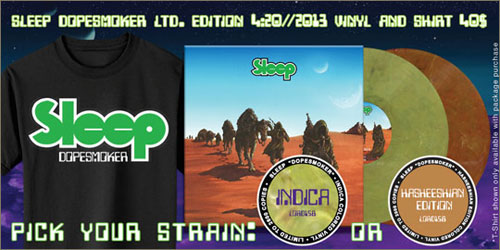 The Southern Lord version of Dopesmoker features brand new artwork by longtime SLEEP artist, Arik Roper, who created something specifically special for the album’s rebirth. The biggest difference between this new version and the old releases is the phenomenal remastering job by Brad Boatright. His vision was to enhance the original recording without changing it drastically. What he has done makes this epic opus sound invigorated, more powerful with renewed clarity and unbelievably mammoth. His work was enthusiastically approved by the band and considering how focused, vigilant and protective of their masterpiece the band is, that is nothing short of a miracle.

Southern Lord worked painstakingly close with the band to make sure that this reissue was done correctly. It would have been completely unacceptable to cut corners or do anything that would not give this album the full respect it rightfully deserves. It meant everything to the label that SLEEP was 100% satisfied with the result of all the hard work and in fact has dubbed this thee ultimate version of the album.

For ordering info, including various package deals, point your browser to THIS LOCATION.