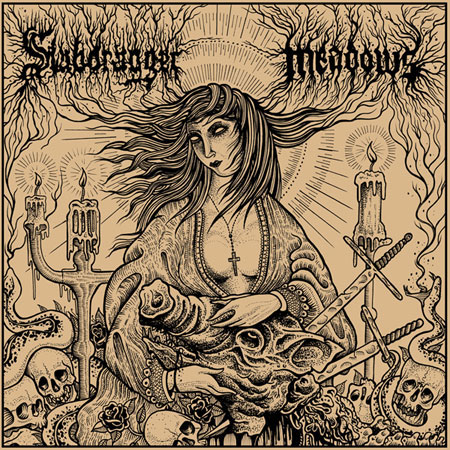 After a few delays along the way, it’s finally on sale! From the label that bought you the mighty CONAN; HEAD OF CROM RECORDS (Conan/Slomatics/Black Sun) presents CROM4: a limited edition (only 300 pressed) 12” black vinyl split album between two white-hot bands: SLABDRAGGER and MEADOWS.

London’s SLABDRAGGER are heavier than a thousand bronze Buddhas and rock out with all the balls of a classic rock power trio reared on 1980s stateside hardcore. They have already established a cast-iron reputation with 2011’s acclaimed debut album ‘Regress’ on Holy Roar Records and a multitude of sterling live appearances including opening for Supersonic 2011 and supporting Saint Vitus on their recent mini-tour.

Suffolk’s MEADOWS hit unbelievably hard with righteous rural crust fury offset with a superb twin guitar attack and have already played stacks of gigs in and around the South East. They have a great self-released ep out plus a split tape (meadows1@bandcamp). Both bands are currently making big ripples in the underground scene, including recent appearances at Desertfest 2012 in Camden.

This lavish split album has been expertly mastered by James Plotkin (ex-Khanate/OLD plus many others) and features stunning original cover art by in-demand London tattoo artist Scott Move.

CROM4 is available now direct from the Head Of Crom website: www.headofcrom.com/releases/crom4.

WO FAT: Dallas Stoner Doom Peddlers Stream Instrumental Version Of The Conjuring Via The Obelisk