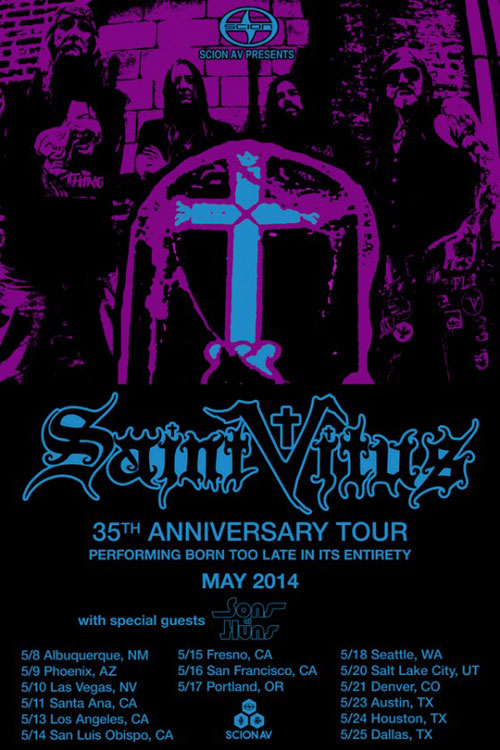 Legendary doom metal icons, SAINT VITUS, are pleased to announce a very special run of live rituals to celebrate their astounding 35th Anniversary! Sponsored by Scion AV, the tour will commence on May 8th in Albuquerque and wind its way through fifteen cities, coming to a close on May 25th in Dallas. The band will be performing the planet-rumbling Born Too Late album — the first SAINT VITUS outing to feature the imperious voice of Scott “Wino” Weinrich — in its entirety alongside other renowned VITUS hymns. The band will be joined by Portland stoner rock power trio Sons Of Huns, supporting their recently released Banishment Ritual full-length on EasyRider Records. Comments the band of their coveted spot on the tour, “We can’t be any more stoked to support one of the finest purveyors of doom and crush many cities in our wake!” Tickets go on sale Friday, March 14th.

Starting April 1st, Scion AV will be giving away two pairs of tickets to every club show via Twitter. See www.scionav.com for details.