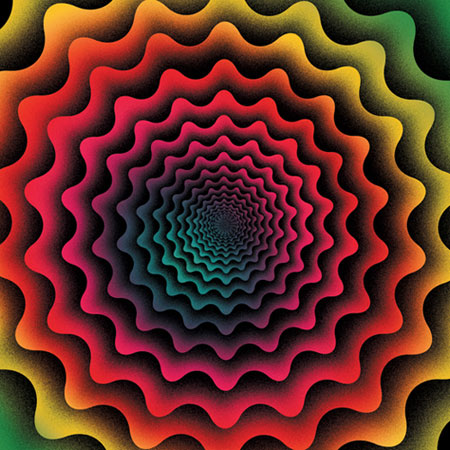 Rocket Recordings are proud to present a re-release of Master Sleeps from Swedish band, HILLS, a three piece based in Gothenburg, on 16th September 2013. This great (future) psych classic, with stunning new sleeve artwork was originally released on a small Swedish label in 2011.

HILLS were responsible for introducing Rocket to the Swedish collective Goat, after sharing the same recording space in 2011. Both bands have since become close allies. You can hear why throughout the 6 tracks of Master Sleeps, as HILLS have the same desire for an infectious groove to drive their over fuzzed ‘psyched out’ sounds.

Master Sleeps draws its inspiration from some of the great bands of the late 60’s and early 70’s. German bands like Can, Amon Duul and AR Machines. And Swedish legends like, International Harvester, Pärson Sound and Trad Gras Och Stenar.

Unlike a lot of the current scene of psych bands that have mined their 60’s and 70’s record collections, HILLS manage to sound contemporary and relevant in 2013. They, along with bands like Oneida, Circle and friends Goat, are able to bring something new to the (well used) table.

HILLS are currently putting the finishing touches to their third album which will be released by Rocket Recordings in 2014, so this reissue of Master Sleeps (and a HILLS live album recently released on Cardinal Fuzz) is a nice taster of what to expect from the next installment from this great band.

Expect live shows throughout Europe in 2014, including a performance at the legendary Roadburn Festival.