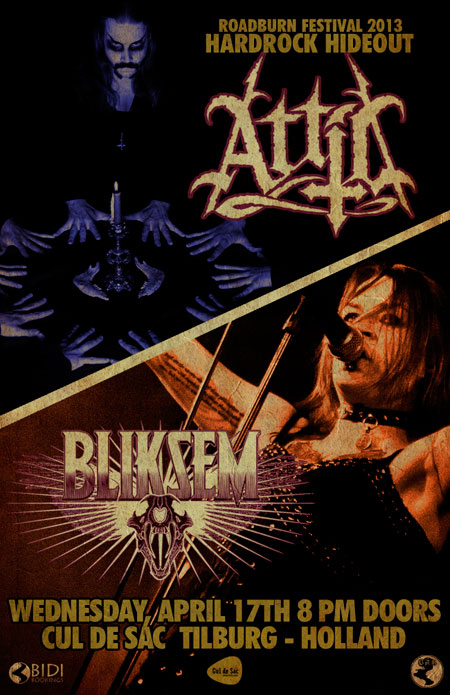 Roadburn Festival 2013 will kick off with their traditional Hardrock Hideout at Cul de Sac in Tilburg, Holland on Wednesday, April 17th. Doors open at 8pm and admission is FREE!

Germany’s Attic will get the party started, serving up raw classic heavy metal that follows the diabolical path forged by Merciful Fate and King Diamond, and burns with the fire of Helstar, Agent Steel and Judas Priest.

A mutual interest in sinister music, horror movies and literature, spirituality and the occult brought Attic together in late 2010. Before long, the band’s debut full-length album, The Invocation (Ván Records) was arnering rave reviews. The record showcases Attic‘s reverence for the stylings of the early metal gods, and is not afraid to embrace the subtle pop sensibilities found in the molten heart of great metal.

In less than three years, Bliksem has established a strong live reputation in the Benelux, Germany and Switzerland, including a blistering set during Holland’s renowned Eindhoven Metal Meeting in 2011 (with Exodus, Heathen,
Immortal and other metal greats).

In addition to opening for Angel Witch, Channel Zero and Vanderbuyst, the band was requested to play after shows for Mastodon and Megadeth. So far, so good, so hot: do not miss Bliksem at the Roadburn Festival‘s Hardrock Hideout!

In related news, Bliksem will release their debut album, Face The Evil, on February 25th via Alone Records.