Pombagira will celebrate the release of Iconoclast Dream (Black Axis Records / Mordgrimm Records) this Sunday, 11th September 2011, at the Purple Turtle in Camden and with seven bands on the bill, including Sweden’s Switchblade, this promises to be a really great show! It’s also an early start, 4pm and damage is just £5 adv or £6 on the door. 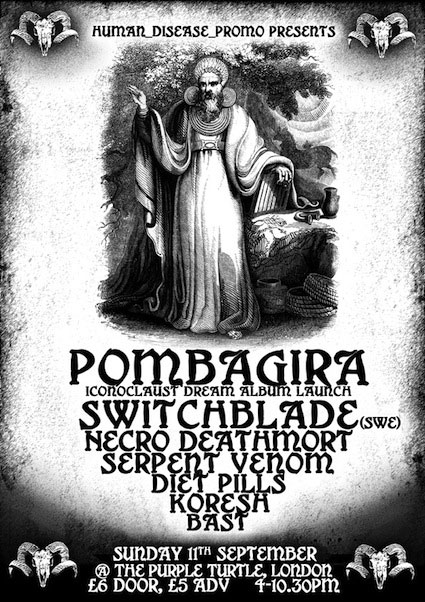 Read on for further information about the album…

One of the heaviest bands to emerge from the UK Pombagira has with their new release unleashed one unholy monster of an album.

Notorious for running a massive back-line to achieve their tone, the band gathered at Earthworks Studio (London) in January 2011 to record Iconoclast Dream. Hard on the tail of Baron Citadel released in September 2010, Iconoclast Dream sees the band raising their game to something that extends beyond the confines of a strict genre label such as doom. Capturing the true dynamics of introspective 60s psych harmonies and early freak beat has catapulted Pombagira into a new arena of popularity. Yes there remain within this composition the heaviest riffs you will hear this side of Christendom. This contorted strung out cerebral orgasmic tune mixed with Sunn 0)))–esque tonal exploration accomplishes a conurbation in visceral vibrations for the mind, body and soul.

With a single song spanning 42 minutes, Iconoclast Dream enters zones of colour and depth never explored previously by the band. Moving in a constant agonised down-tuned sway, creating textured soundscapes, leads the discerning listener to the overbearing ethereal awareness of the album’s subject matter. Ensconced in the life experiences of having visited Haitian cemeteries, witnessing and participating in Voodoo ceremonies, Iconoclast Dream galvanises the relationship the band have had and continue to have with Baron Samedi, the spirit of the cemetery and gatekeeper to the graveyard dirt track.

Beautiful in its grandeur, resplendent in its darkness Pombagira’s Iconoclast Dream provides a master class on how to captivate an audience with sound, and tone while recounting a tale about regeneration and the subsequent destruction of self-erected icons.

The album will be released on 19th September 2011 on Black Axis Records / Mordgrimm Records, you can read Paul’s review of ‘Iconoclast Dream’ on this very site here and check out ‘Causeway Charred’ taken from their previous album ‘Baron Citadel’ below.