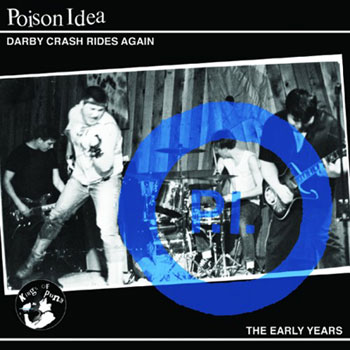 Southern Lord will be releasing CD versions of several Poison Idea reissues that TKO Records are currently re-releasing on vinyl. All of the material is being re-mastered by Jack Control (World Burns to Death) and each release includes new, extensive liner notes as well as never before seen photos and previously unreleased bonus material.

This Poison Idea reissue series kicks off January 30th, with the re-release of Darby Crash Rides Again: The Early Years. Boasting twenty-nine tracks from the band’s earliest days, the album includes the 100% previously unreleased Boner’s Kitchen demo from 1981, the complete Darby Crash Rides Again demo from 1982, the complete uncut live-on-the-air set from the 1983 KBOO radio benefit, and outtakes from the Record Collectors Are Pretentious Assholes recording session. Much of this material has either been out-of-print or never before officially released! All the recordings have been meticulously restored and mastered by Jack Control at Enormous Door Mastering. The booklet contains liner notes, old flyers and tons of previously unpublished photos from the band’s beginnings. This is a complete no-brainer for Poison Idea fans or any fan of the early days of American hardcore punk.

Following Darby Crash Rides Again in January, Southern Lord will also re-release The Fatal Erection Years (Pick Your King/Record Collectors are Pretentious Assholes), War All The Time, Ian Mackaye, Feel The Darkness, We Must Burn and Last Will & Testament throughout 2012.