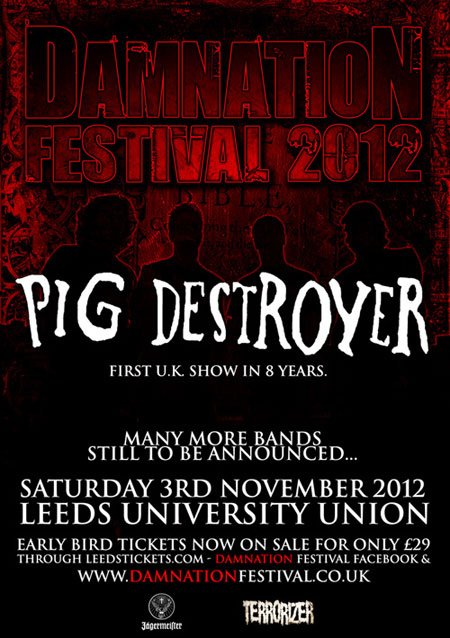 US grindcore stalwarts PIG DESTROYER will return to the UK for the first time in eight years to perform at Damnation Festival.

The Virginia extreme metal quartet will make a rare overseas excursion to headline the Terrorizer Stage at Leeds University Union on Saturday, November 3, 2012.

It marks the first of many coups for the eighth edition of Damnation Festival, following a hugely successful event last year, and eager fans can get their hands on early bird priced tickets which will go on sale at 9am tomorrow.

On returning to UK shores, Pig Destroyer said: “Pig Destroyer is pleased to announce they are looking forward getting pissed in the UK for the first time in eight years.

“Our British accents are a little rusty and new drummer Adam Jarvis is going to have a doss time.”

Festival director Gavin McInally added: “It’s great to get this year off to a bang, and they don’t come much noisier than Pig Destroyer.

“There isn’t a more suitable stage to host their long awaited return to the UK than our legendary Terrorizer Stage, which they’ll close in devastating fashion.

“As always, we’ll aim to put together the most exciting and diverse bill we can possibly manage and, having not raised ticket prices since 2008, we’ll keep early bird tickets at £29 for our loyal fanbase.”

Tickets are on sale, priced £29 from http://www.leedstickets.com and via the official Damnation Festival site and Facebook through Ticketscript: http://www.damnationfestival.co.uk/tickets

BRUTUS: Svart Records Gear Up To Release ‘Behind The Mountains’; Pre-Orders Now Available