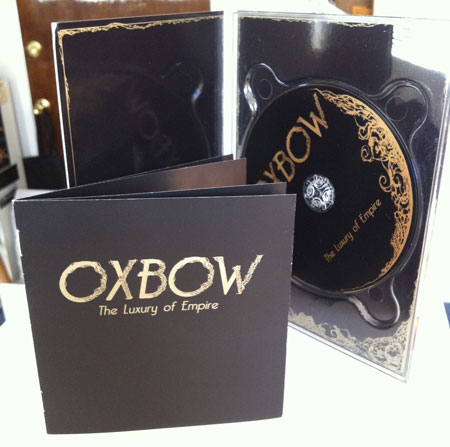 This DVD filmed on OXBOW’s European tour of 2009 and which coincided with their 20th anniversary follows the seminal band as they tour alone for the first time in many years and is available exclusively in the UK via Future Noise and can be purchased over on their store for £11 HERE.

The three complimentary parts give a rare 360 degree glimpse of the front and backstage realities of touring offers an intimate portrait of a band in full artistic maturity. It sees them undergoing the daily trails of touring with grace and provides sometimes touching and humorous insights into an otherwise mysterious band. The film’s dark cinematic aesthetic was inspired by the atmosphere of OXBOW’s recent work. It echoes its title and is interlaced with live performances and candid interviews in which the band peel away layers of their processes and which bring the viewer as close as it’s possible to get to a band without being in it.

By contrast, the band’s long time sound engineer, Manual Liebeskind’s film “Still Before” is a road dairy filmed entirely on an iphone and covers the entire tour. It widens the cast introducing many more of the behind-the-scenes players involved in making such a tour happen much more raw in its style and making use of still photos as links between scenes, it’s loose, convivial style juxtaposes perfectly with the first film.

The final piece is the live performance in Paris, filmed in its entirety. Impressive in its execution, it serves as a document of the culmination of all the work and energy expended in the two accompanying films.

A delight to watch of anyone, whether familiar with the subject or not, but for a fan of OXBOW an invaluable addition of the collection.

Mariexxme began her career in animation where she worked on the full spectrum of the industry’s subjects from Kellog’s adds to art house animations sucvh as “Persepolis”, from the Disney channel to an adaptation of the lost Jacques Tati script which came to be the film “The Illusionnist”, The list of bands she has filmed since and edited is exhaustive but includes The Melvins, The Jesus Lizard, Kylesa, Lighting Bolt, Julie Christmas, Jello Biaffra, Senser.