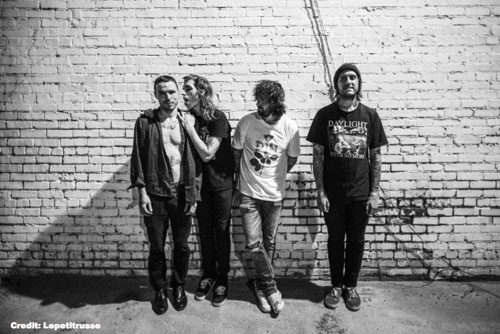 Philadelphia-based NOTHING have unveiled details of their upcoming European/UK tour. The four-piece, shoegaze-heavy band made their European debut in April this year at a one off, exclusive show at the Roadburn Festival in Tilburg, The Netherlands. The upcoming tour will see NOTHING take in dates in the UK, Italy, Austria, Hungary, The Czech Republic, Germany, Belgium and return to the Netherlands. Full dates are listed below. More dates will be announced shortly.

NOTHING‘s front man, Domenic Palermo commented: “Can’t wait to get out of the United States for awhile and come visit Europe. I hope someone takes me in so I never have to go back home.”

NOTHING was formed in 2011 by Domenic Palermo. Previously Palermo was the brains behind the early 2000′s hardcore/punk act Horror Show. In 2002 Horror Show was put on hold after Palermo was incarcerated for a stabbing that eventually led to a 2 year prison sentence. Upon his return Palermo would take a lengthy hiatus from music. In 2011 Palermo released a demo tape titled “Poshlost” under the moniker NOTHING.

After several attempts at constructing a solid lineup for the band Palermo met Brandon Setta. Setta would bring a lush, rich soundscape and a fresh approach to Palermo’s vision for NOTHING. Setta and Palermo would handle the writing for the next release, a very rare 12″ EP that was released on Japanese boutique label Big Love Records called Suns And Lovers(A play off of the D.H. Lawernce book). It was limited to 300 copies and the bands share was donated back to the label for a Tsunami Relief Charity.

The next release, Downward Years To Come was a 5 song EP and was recorded at the Rubber Tracks Studio in Brooklyn with Kyle “Slick” Johnson. The record was released by Baltimore Label A389 Records in November 2012. Written by Palermo and Setta, the concept behind Downward Years To Come was a dedication to several different poets who had taken their own lives. Head to NOTHING‘s bandcamp page HERE to stream or purchase Downward Years To Come and Suns And Lovers. Setta and Palermo would again head into the studio, this time with Jeff Zeigler at Uniform Recordings to write their debut LP, Guilty of Everything and sign with Relapse Records.

You can also read Antony’s review for Guilty Of Everything HERE and an interview with Brandon Setta HERE.