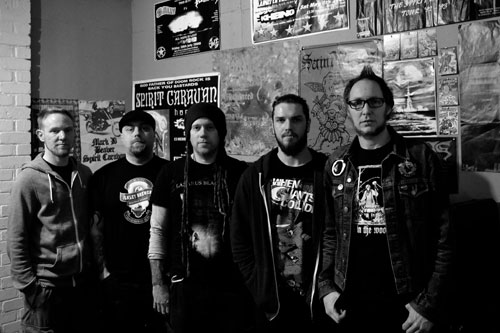 Bradford, UK based doom rockers MONOLITH CULT, who feature members from the much missed Khang who later morphed into Lazarus Blackstar, have unleashed a new demo track for your listening pleasure.

Entitled The Kings Of All That’s Lost, the track, which was recorded by Boulty at Stuck On A Name Studio in Nottingham, gives us an insight as to where the band are heading in 2015 with a less rock and more heavy doom approach, now click play below to have your senses tormented by the by the cult of the monolith:

The Kings Of All That’s Lost will also feature on MONOLITH CULT’s, as yet untitled, sophomore album that is planned to see the light of day during 2015, more news to follow in due course.

In the meantime, you can still pick up the band’s debut album Run From The Light that Mark championed in his review “…if you like the rich history of rock like Ozzy, like St Vitus and Rainbow, flavoured with the cream of the UK Underground then you should be killing yourself to listen to this album” on CD & Vinyl from the Future Noise webstore.