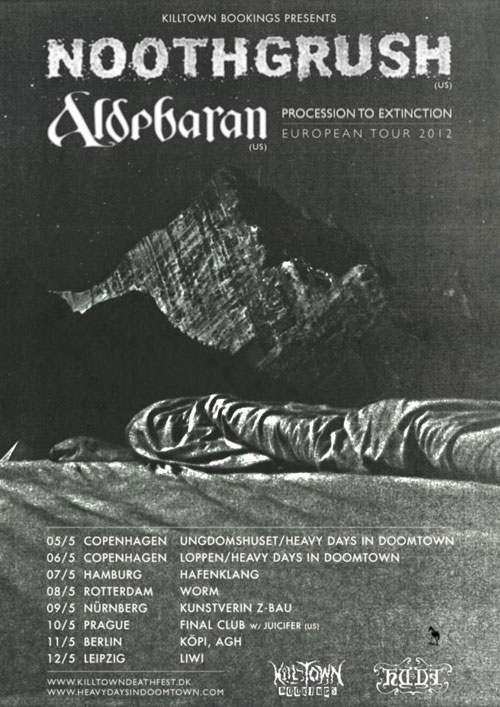 Killtown Bookings is extremely proud and honored to present the very first European tour ever of Oakland sludge masters NOOTHGRUSH and Portlands heaviest and most crushing outfit, ALDEBARAN!!!

This tour will be the first time that both these bands have ever set foot on European soil, so dont´miss your chance to see these two great bands!

After more than 10 years of hiatus NOOTHGRUSH is back doing shows again and has been confirmed for a number of festivals among them Maryland Death Fest, Southern Lord’s Power Of The Riff Festival and Danish newcomer festival Heavy Days In Doomtown. NOOTHGRUSH will bring Dino Sommese from legendary Dystopia/Asunder as their vocalist on this short Euro tour in May 2012 consisting of only 7 exclusive shows in central Europe.

For those of you who aren’t familiar with NOOTHGRUSH ; they play uncompromising minimal doom sludge metal with a hardcore feel to it. It is stripped down no-bullshit slow and heavy as fuck with agonizing tormented vocals. The band has its roots in the DIY punk/hc scene in Oakland and has over the years released a buch of split eps with Corrupted, Sloth, Gasp among others. The lyrical themes deal with people’s inhumanity towards one another and the misery and oppression our political, social and economic systems inflict on us all and on nature, and the lies and propaganda that maintain these systems and keep us deluded and ignorant.

Featuring current and past members of Wolves in The Throne Room, Oakhelm, Fall of the Bastards, and Weregoat, ALDEBARAN is carrying on the Pacific North West doom tradition, blending the sonic aesthetics of black metal and the meat of the most virulent doom metal acts with the glacial and epic song structures of the likes of Corrupted, Asunder, Grief and Earth. Crawling forth from the primordial ooze in 2003, the trio first felt the eldritch emanations from R’lyeh. Devotees of the dark arts and darker fictions, they fell right in with the depraved droning doom of these emanations and christened themselves, ALDEBARAN, for the dread star of its origins. ALDEBARAN immediately established themselves as a standout act with their crushing and heavy sound combined with lyrical influence of that dread star and the Great Old Ones. 2012 will mark a decade of existence and the first ever European appearance at the Heavy Days In Doomtown fest as well as the release of a new full length in time for the European Occultation.

The tour will start with the very first shows at Heavy Days In Doomtown Fest in Copenhagen taking place from May 3rd-May 6th 2012 and after that hit 6 more stops in Central Europe.