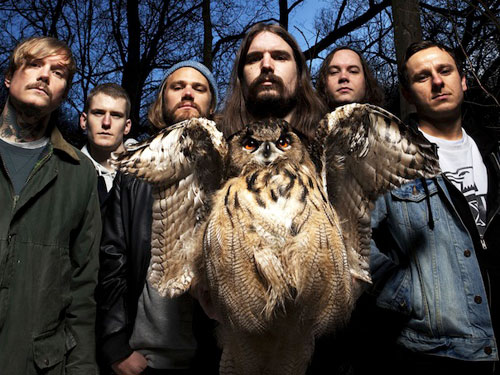 Smashing onto the global rock and metal scene in 2010 with their jaw-dropping, sound-mangling, WTF-ensuing, self-titled debut, KVELERTAK came virtually from out of nowhere. “It’s punk! No, it’s black metal! Oh no wait, its stadium rock!” were pretty much the stock reactions to ‘Kvelertak’, a record which surfed between everything from bone-slicing riffs to hailstorming blastbeats to beautifully anthemic sing-a-longs, often all in one song. There was simply no stopping the likes of ‘Mjød’, ‘Ulvetid’, ‘Sultans of Satan’ and the mighty ‘Blodtørst’ from catapulting the Norwegian six-piece to huge international acclaim and mesmerisation, with no compromise to lyrics written entirely in their native tongue. Having the likes of production mastermind Kurt Ballou behind the mixing desk and a certain Mr J.D. Baizley on hand to provide one of his gorgeous paintings to adorn the front cover certainly weren’t bad ideas either!

Fast-forward to 2013 and KVELERTAK were quickly snapped up by the likes of Roadrunner and Sony Music in time to release the similarly barn-storming follow-up ‘Meir’, simply translated as “more”. The likes of the fun-to-the-dozen ‘Bruane Brenn’ and the neck-snapping ‘Trepan’ easily picked up were the self-titled debut left off: providing fans with another 50-minute burst of raw, raucous power entirely hell-bent on a collision course to somewhere between hardcore, crust-punk and majestic hard rock glory.

Live, KVELERTAK are a ferocious thunderbolt of screaming, metallic gusto. Kjetil Gjermundrød’s devastating, yet meticulous drumwork sits behind no less than a three-pronged guitar attack as chief songwriter Bjarte Lund Rolland leads his tribe into a riffing gauntlet from which few could ever hope to return. Topping off this clusterfunk of twisted, schizo-riding bombast is Erlend Hjelvik – the shirts-off, rage-spitting Viking once described by no less than James Hetfield as simply “savage”. Throw in Marvin Nygaard’s grooves on bass and you have a recipe for a tasty smalahove of heaviness!

So fill your drinking horn, shake some sweat through your beard and get ready to witness the sonic mind-chasm of a KVELERTAK live extravaganza at DesertFest 2014 in London & Berlin!

DesertFest London 2014 takes place over the weekend of the 25th-27th April 2014 across 3 venues in Camden, London with weekend passes available from Leeds Tickets HERE.

While DesertFest Berlin 2014 takes place over 24th-26th April 2014 at the famous Astra Kulturhaus in Friedrichshain/Kreuzberg, info on tickets can be found HERE.